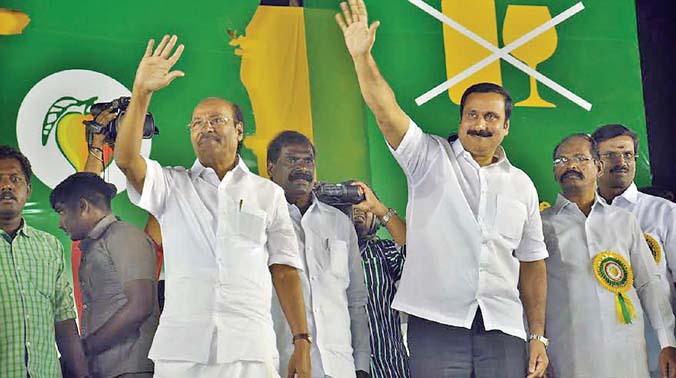 PUDUCHERRY: The PMK on Tuesday announced its decision to go it alone in the Assembly polls in Puducherry scheduled to be held on April 6.

The announcement comes a day after the S Ramadoss led party commenced parleys with the BJP on the number of seats to be contested as part of the NDA, which remained inconclusive.

Convenor of the Puducherry unit of PMK K Dhanaraju told PTI that his party was kept in dark on the seat sharing exercise between the AINRC, AIADMK and BJP and the decision these parties had taken on sharing of seats.

“I had presented a letter to the BJP observer for Puducherry, Nirmal Kumar Surana at a meeting here on Monday, seeking allocation of five seats for the PMK to contest the forthcoming election as part of NDA.”

“We had no information about the deliberations the AINRC, AIADMK and BJP had held finalising allocation of seats among themselves.

While 16 seats had been allotted by the NDA to AINRC to field its candidates the remaining fourteen seats have been earmarked to the BJP and AIADMK,” he said.

Expressing displeasure over being kept in the dark about thedeliberations between three constituents of NDA, Dhanraj said, “The PMK which is a recognised party in Puducherry has decided to contest the polls on its own.”

“We will field candidates in all the 30 constituencies in the Union Territory,” he said.

Earlier in the day, the opposition AINRC firmed up alliance with the BJP and AIADMK for next month’s assembly polls and exuded confidence that the coalition will emerge victorious at the hustings.