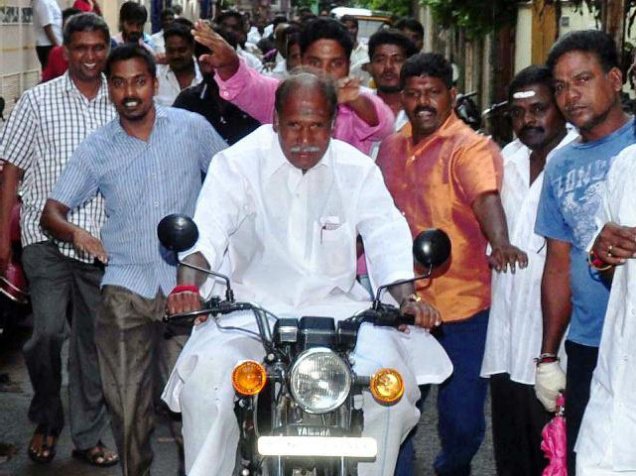 Rangasamy contested from Kadirkamam constituency in the last poll held in 2016.

Now, he seeks to contest from Thattanchavady which was his pocketborough in the past.

He told reporters after filing nomination that the NDA, headed by AINRC in the Union Territory, would romp home in the poll.

He said he would also file nomination on Wednesday in the lone segment in Yanam, an enclave of Puducherry, in Andhra Pradesh).

A release from the Returning officer Y L N Reddy, before whom the nominations were filed, said he had received nominations from Richards of BJP and from Om Sakthi Segar of AIADMK.

The AINRC was earmarked 16 seats at the end of negotiations among the AINRC, AIADMK and BJP recently.

There was no clear allocation of the remaining 14 seats between the AIADMK and BJP as they were asked to share between them the seats.

At one stage, it was stated that the AIADMK, which had four members in the outgoing Assembly, was allotted only four constituencies while the remaining 10 were set apart for the BJP.

The four constituencies the AIADMK annexed in the previous poll were Muthialpet, Uppalam, Mudaliarpet, and Karaikal south.

Pending a final announcement by AIADMK on the constituencies and also its nominees,Vayyapuri Manikandan of AIADMK filed papers seeking re-election from Muthialpet.

A K D Arumugham, who shifted his allegiance from Congress to AINRC recently, filed papers seeking election from Indira Nagar on AINRC ticket.

Former Health Minister Malladi Krishna Rao (Congress), who quit the ministerial post and also the MLA post in February, extended support and started wooing voters to back Rangasamy through extensive campaign even before the latter filed the nomination.

The DMK nominee S P Sivakumar, a former Education Minister, filed his papers to contest from Raj Bhavan constituency and he would lock horns with Lakshminarayanan in the constituency.

A John Kumar who quit the Congress in February and joined Bharatiya Janata Party (BJP) filed the papers to retain Kamaraj Nagar constituency.

Kumar told PTI that his son Richards John Kumar, who also joined the BJP along with him in February, filed nomination to contest from Nellithope constituency on BJP ticket.

G Nehru, who was AINRC legislator between 2011 and 2016, filed papers now as Independent seeking to regain Orleanpet.

Among the others who filed nominations included the DMK candidates R Siva (Villianoor constituency), L Sampath (Mudaliarpet) and Gopal (Orleanpet).

Congress would release names of its candidates on Tuesday, party sources said.

The party has been allotted 15 seats out of the total 30 constituencies and is part of the Secular Democratic alliance comprising DMK, VCK, Left parties among others.

The DMK has been earmarked 13 constituencies.

The party has already announced names of its candidates for 12 out of the 13 segments.

CPI, a constituent of the Secular Democratic Alliance, has been allotted the Thattanchavady constituency.

The party secretary A M Saleem told newsmen that Sedhu Selvam was the CPI nominee from Thattanchavady segment.

In this article:AINRC, N Rangasamy