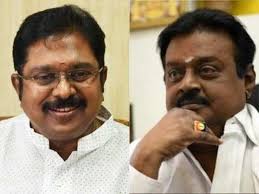 Under the agreement, DMDK, which walked out of the ruling party led alliance recently would contest from city segments like Villivakkam, Egmore (Reserved) and Sozhinganallur besides constituencies in several parts of Tamil Nadu.

The DMDK, which demanded at least 23 seats from AIADMK snapped ties with it days ago after the ruling party declined to part with it.

In a statement he said that the nominees who have been withdrawan would be given opportunities in future. The decision to allot seats to DMDK was taken considering victory in mind, he said. He urged party workers to slog to establish “Amma’s true welfare government,” in Tamil Nadu.

The AMMK had already allotted six seats to Social Democratic Party of India and three segments to Asaduddin Owaisi’s AIMIM.