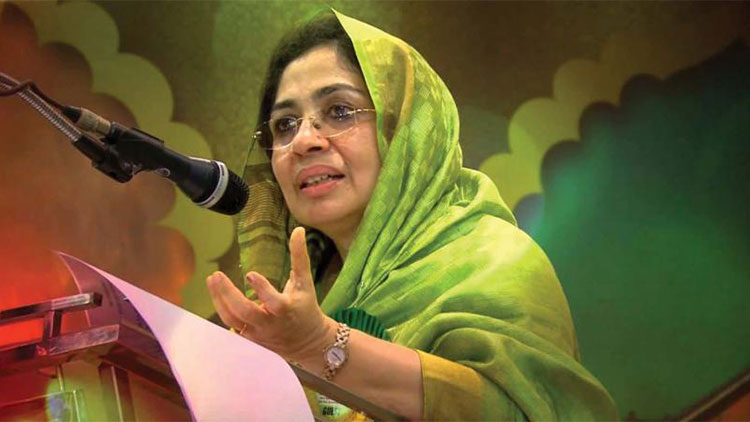 MALAPPURAM: For the first time in 25 years, the Indian Union Muslim League (IUML), a key ally of the Congress-led United Democratic Front, is fielding a woman candidate in the April 6 assembly elections in Kerala.

Noorbina Rasheed is among the 25 candidates announced by the party on Friday, as it dropped two tainted MLAs, including former minister V K Ibrahim Kunju.

Eight sitting MLAs have been fielded by the party, besides former Malappuram MP and senior party leader P K Kunhalikutty, who resigned his Lok Sabha seat recently to throw his hat in the state poll arena.

The IUML also announced Abdul Samad Samadhani will be its candidate for the byelection to the Malappuram Lok Sabha constituency, also to be held on April 6.

Noorbina Rasheed will fight the election from Kozhikode South constituency and became the first woman candidate from the IUML since 1996 when Kamarunnisa Anwar had unsuccessfully tried her luck from the same segment.

“There were allegations that women were not given importance in our party. This is a reply to them. I will take up the responsibility and fulfill my duties towards the voters,” Rasheed told reporters.

IUML has been allotted 27 seats out of the total 140 and two more candidates would be announced later.

The party also said P V Abdul Wahab, whose Rajya Sabha term, is ending next month would be the party’s nominee for the seat again.

“Three senior leaders, P K Kunhalikutty, M K Muneer and K P A Majeed have been given exemption from the three-term criteria for candidate selection. All other MLAs who have completed three terms have been denied tickets this time,” an office-bearer of the party said.

Ibrahim Kunju and M C Kamaruddin, jailed in Palarivattom flyover case and jewellery scam respectively were not given tickets this time.

However, Kunju’s son K E Gafoor has been nominted from Kalamassery.

Kunhalikutty, a former industries and IT minister, will contest from Vengara segment while another former minister M K Muneer will try his luck from Koduvally.

Meanwhile, a section of Congress workers hit the streets in various places expressing unhappiness over some of the names being discussed as probable candidates though the official list is expected to be released only on Saturday.

While ten members of Kasaragod district Congress committee reportedly said they would resign from the party if their demands were not met by the party in the candidate selection, workers are against handing over Thrikaripur constituency to the front ally Kerala Congress (Joseph).

Varkala and Chelakkara constituencies in Thiruvananthapuram and Thrissur districts witnessed protest marches by Congress workers who said they “don’t want someone from outside the constituencies”.

Perambra constituency has been given to the IUML, prompting Congress workers to protest.

Posters have appeared in Alappuzha demanding M Liju, a Youth Congress leader and party spokesperson, be made the candidate.