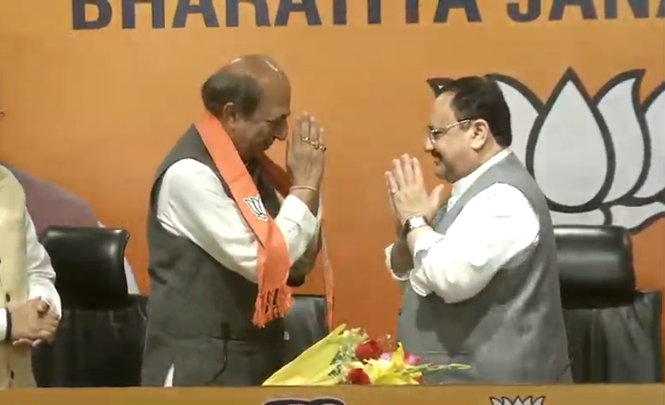 Former Trinamool Congress MP Dinesh Trivedi joined the BJP on Saturday, weeks after he announced quitting his Rajya Sabha membership on the floor of the House deploring “violence” in poll-bound West Bengal.

He joined the BJP in the presence of its president J P Nadda, and Union ministers Piyush Goyal and Dharmendra Pradhan besides other leaders.

Lauding Trivedi as a principled politician, Nadda said he was earlier a right person in the wrong party and was now in the right party.

Trivedi said he had been waiting for this “golden moment” and added that family is supreme in some parties but it is people who are supreme in the BJP.

He also praised the Modi government for its handling of the COVID-19 pandemic and the issues involving neighbouring countries.

A number of TMC leaders have quit the party in recent months to join the BJP as the saffron party mounts an aggressive all-out campaign to end Chief Minister Mamata Banerjee’s 10-year-old reign in the state.

Trivedi (70) was once a close confidant of TMC president Banerjee and was her choice for holding the important railway ministry portfolio in the Union Cabinet during the UPA government.

Though his ties with her strained resulting in him being removed from the cabinet, they later patched up. After losing the Lok Sabha election in 2019, he was sent to the Rajya Sabha by the party.

With the BJP being successful in wooing over a number of TMC leaders to its fold, the saffron party has said that this underscores an increasing unease in its rival camp and is a pointer to its “decisive” victory in the assembly polls to be held in eight phases between March 27 and April 29.

TMC says he is ungrateful

Slamming its former Rajya Sabha MP Dinesh Trivedi for switching over to the BJP, the Trinamool Congress on Saturday said he is “ungrateful” and has backstabbed the ruling party in West Bengal ahead of the assembly polls.

Trivedi quit from the upper House of Parliament last month, saying he was feeling suffocated in the Trinamool Congress and was unable to bear various incidents that are happening in the state.

Earlier in the day, he joined the BJP at its headquarters in New Delhi in the presence of saffron party president J P Nadda.

Reacting to the development, Trinamool Congress spokesperson Kunal Ghosh said, “For the last so many years, he (Trivedi) did not say anything. Now, just before the state assembly polls, he has made complaints about the party. He is ungrateful and has betrayed people of the state.”

“He held several posts of the party and was entrusted with many responsibilities. At a time when he should repay the Trinamool Congress, he has backstabbed it,” Ghosh said.

Trivedi was once a close confidant of West Bengal Chief Minister and Trinamool Congress supremo Mamata Banerjee and was her choice for holding the important railway ministry portfolio in the Union Cabinet during the UPA government.

Several TMC leaders have quit the party in recent months to join the BJP as the saffron party mounts an aggressive all-out campaign to end Banerjee’s 10-year-old reign in the state.

Apart from Trivedi, two former state ministers – Suvendu Adhikari and Rajib Banerjee – had quit the Trinamool Congress and switched over to the BJP recently.

Since the 2019 Lok Sabha polls, 19 TMC MLAs and a Lok Sabha MP of the party had joined the BJP.

Elections to 294 assembly seats in West Bengal will be held in eight phases, beginning on March 27. Votes will be counted on May 2.