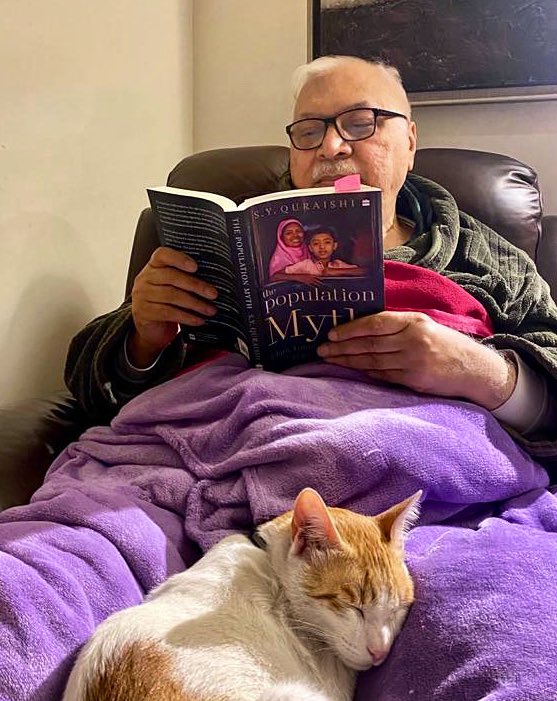 NEW DELHI: Declaring that the time has come to bust “myths created by Hindutva groups” to demonise Muslims, former chief election commissioner S Y Quraishi says Islam is not hostile to the concept of family planning and Muslims are the least polygamous among all communities in India.

There is also no organised conspiracy by Muslims to overtake Hindus in terms of population and their number can never rival that of Hindus in the country, Quraishi argues in his newly released book The Population Myth: Islam, Family Planning and Politics in India .

He uses facts and figures to demolish propaganda that he says is reaching a crescendo .

“If you repeat a lie a hundred times, it becomes the truth,” Quraishi added in an interview to PTI on his book.

The propaganda, he said, has become very blatant and gained traction, and it’s time to challenge the narrative perpetuated against the community over the years.

One myth, which most Muslims also believe, is that Islam is against family planning. But that is not so at all, Quraishi said.

“A close look at Islamic jurisprudence reveals that Islam is not against family planning at all. On the contrary, it is the pioneer of the concept, a fact that has got blurred over the years because of skewed interpretations of the Quran and Hadith,” Quraishi said.

“I have argued that the Quran has nowhere prohibited family planning,” he added while stressing that there are only interpretations – for or against.

Islam, he explained, is supportive of family planning ideas as it expects youth to marry only when they have the wherewithal to support a family. It lays great emphasis on the health of mother and children and the need for proper upbringing,” said the former bureaucrat who was chief election commissioner from July 2010 to June 2012.

Quraishi argues in his book that family planning is actually not a Hindu-versus-Muslim issue as the two communities have similar statistics and stand shoulder to shoulder in the socio-economic indicators that influence family planning behaviour.

Their socio-economic conditions are region specific, and that is what determines their fertility behaviours, he asserts.

It is true that a Hindu-Muslim fertility differential persists in the demographic reality of India, but this is due to the relative backwardness of Muslims in all factors that determine fertility behaviour — literacy, income and access to services being some of them.

Polygamy is among the myths he has attempted to bust in his book. Hindutva groups have perpetuated the propaganda that Muslims marry four wives to increase their population with statements such as Hum Chaar Humare Chalees and Hum Paanch Humare Pachchees which are all utterly baseless , Quraishi said.

Trends through three decadal Censuses, from 1931 to 1960, confirm that polygamy cuts across all communities, but is declining among all of them, and, most importantly, is least among the Muslims, as per the only government report on the issue, he said in a phone interview.

In fact, Muslim society in India in general views polygamy with great disfavour, he said.

“A bigamist is looked down upon as an outsider in his family,” he said, adding that polygamy is also statistically not possible in India as the gender ratio (only 924 women per 1,000 men) does not permit it.

The propaganda, repeated and orchestrated, is meant to create doubts and fears in the minds of Hindus. Refrains like Hinduism khatre mein hai’ (Hinduism is in danger), Muslims will increase in number and capture political power, are part of a deliberate design with the clear intention of driving a wedge between Hindus and Muslims, Quraishi said.

While it is true the proportion of Hindus has come down in 70 years — from 84.1 per cent to 79.8 per cent — with corresponding increase in population of the minorities, mainly the Muslims, the Muslim adoption of family planning has been much faster in the last three decades, he said.

If Muslims have the highest birth rate, Hindus are a close second, the former CEC pointed out.

Even in absolute numbers, Hindus have nothing to fear, Quraishi said, adding that there were 30 crore more Hindus than Muslims in 1951 and the gap increased to over 80 crore by 2011.

Nobody has called the bluff of this propaganda, he said.

To underscore his argument, Quraishi has added a mathematical model in the book.

Quraishi also addresses himself to the issue of women and the notion that Islam treats them badly. Nothing, he said, can be farther from the truth.

As early as 14 centuries ago, Islam recognised women as equal partners to men in all spheres of life. Muslim women got property rights 1,400 years ago while women in the rest of the world got it in the 20th century, he said.

He also hit out at the argument that Muslims were a vote bank, saying that they would be politically powerful if they were indeed a solid vote bank,

They get crumbs in the name of power. If they were a vote bank, despite being 30 per cent in Bengal and Kerala and 20 per cent in UP and Bihar, they can’t dream of becoming a political force. Instead, all they get is a token minister of minorities’.

The Muslim vote tends to get divided and they do not vote en bloc, he argued.

Quraishi says in his book that population stabilisation is now well within sight with 24 of 29 states reaching below the replacement rate of 2.1.

“We need to focus on the four biggest states of the Hindi belt which are pulling us down. If the collective march towards the cherished goal of population stabilisation continues uninterrupted, the country can hope to reap the benefits of demographic dividend and become a global economic super power very soon,” he said.

He also urged Muslims not to fall prey to the hate propaganda and incitement for a procreation war but adopt family planning proactively in the interest of the community and the country.