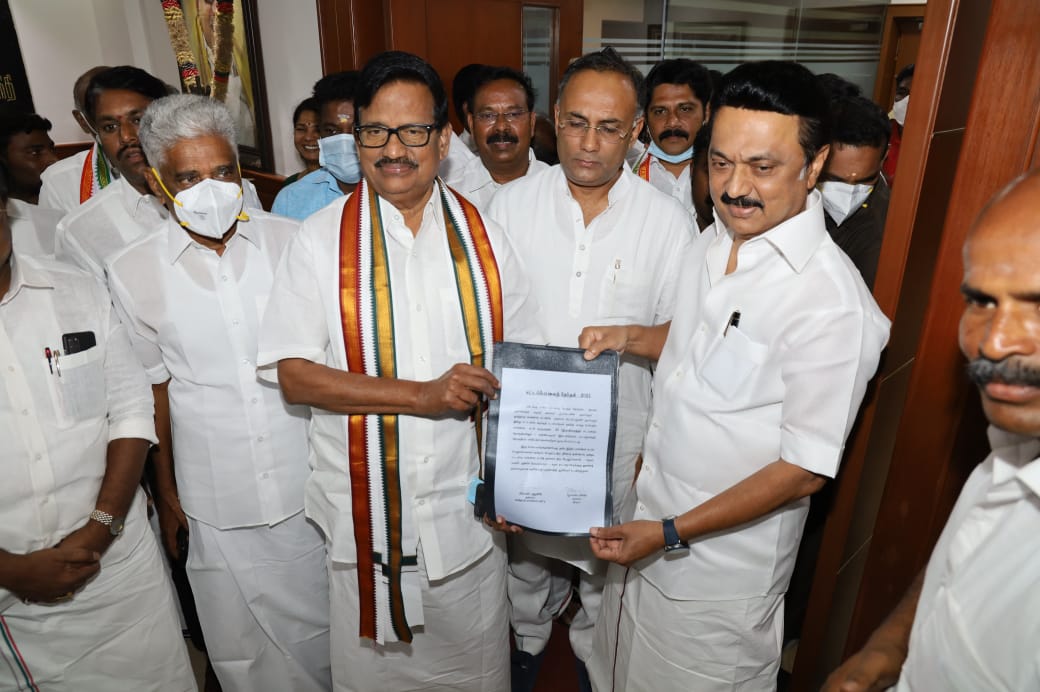 CHENNAI: Tamil Nadu Congress Committee president K S Alagiri on Sunday said his party did not intend seeking a share in power if the DMK is elected after the April 6 assembly poll.

He expressed joy over the Congress getting 25 seats from the Dravidian partner. His party has, however, sought a Rajya Sabha seat from the DMK, the TNCC leader said

After signing the seat sharing agreement with DMK chief M K Stalin here, Alagiri, all smiles, told reporters that the conclusion of the deal has given his party huge enthusaism and joy.

Secularism is the converging point for Congress, DMK and other constituents, he said.

“BJP is a big disease of the country and it is trying to infect others as well,” he alleged.

Asked if there was a chance for the Congress to seek a share in power if the DMK was voted into office as there were ‘talks’ of BJP making such a demand with the AIADMK, he said, “no, we have no such intention.”

“No,” he said to a question on whether he would contest the assembly election.
During the 2006-11 DMK regime, a Congress chorus of ‘share in power’ was well-known. However, the Dravidian party, then led by late M Karunanidhi,did not give in to the clamour.

The AIADMK those days had often mocked at the DMK as a ‘minority’ government for depending on the support of its allies to survive.

Asked if his party has sought a Rajya Sabha seat from the DMK, Alagiri answered in the affirmative, adding that the DMK has assured them that it would consider the request.

In June 2022, six Rajya Sabha members, four from the ruling AIADMK and two from the main opposition DMK, will retire.

Alagiri denied that his party was currently not giving prominence to its slogan of setting up ‘Kamaraj rule’ in Tamil Nadu.

The Congress would give a thrust to the slogan after the 2021 Assembly election and work for it as “this is the time to defeat the BJP and not the time to bring about the rule of Kamaraj.

After beating the BJP we will bring Kamaraj’s rule,” he said.

A Congress icon and freedom fighter, K Kamaraj was a former Chief Minister and is respected by people cutting across party lines for his honesty, good governance and a life dedicated for the people.

To a question on the number of seats contested by the Congress in DMK alliance witnessing a steady decline over the years, from a high of 110 in 1980 to 25 this year, he said rise or fall in numbers is quite natural in politics.

The number of constituencies a party fought is decided according to the ‘field scenario’ of the day that changes from election to election.

“In tomorrow’s election we may even contest from 200 constituencies,” he said, adding the strength of a political party must not be decided based on the number of seats it fought.

“Congress is a national movement and we are the only alternative to the BJP.”

Apparently, after hard negotiations that stretched over several days, the Congress managed to get 25 seats with the DMK opening the dialogue with an offer of 18, increasing it to 22 and closing the deal at 25 segments.

Alagiri said party leader Rahul Gandhi had opined during his recent campaign that the Tamil Nadu election was more than an initiative for a mere regime change and was all about an ideological war.

Gandhi had said that the secular front should emerge victorious and the pact has been concluded in sync with his vision, he said, adding a list of constituencies preferred by his party would be given to the DMK in a day or two.