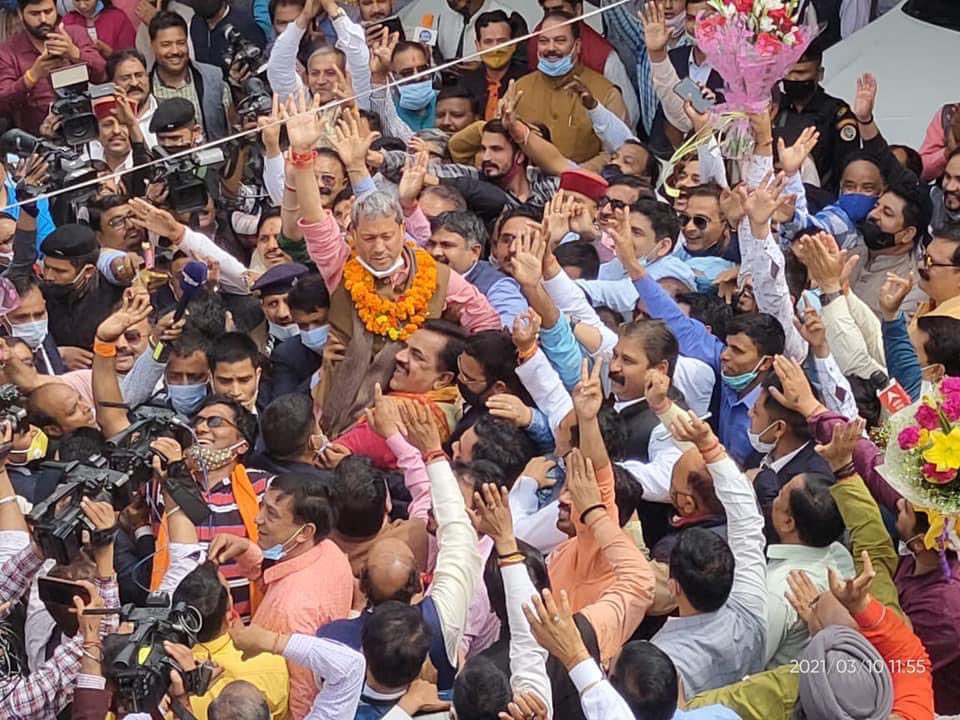 DEHRADUN: BJP’s surprise choice for the top job in Uttarakhand Tirath Singh Rawat was sworn-in as the state’s new chief minister on Wednesday, replacing Trivendra Singh Rawat ahead of next year’s Assembly polls.

The oath of office was administered on Rawat by Uttarakhand Governor Baby Rani Maurya at a simple function held at the Raj Bhawan here in the evening in the presence of a host of dignitaries.

Rawat alone was sworn-in on Wednesday, which means the members of his Cabinet will be finalised and sworn-in later.

Rawat is currently the BJP MP from Uttarakhand’s Pauri Garhwal Lok Sabha constituency as well as a national secretary of the party.

He was the president of the Uttarakhand BJP from 2013-15.

Known as a simple and down-to-earth leader, Rawat takes over the reins of power in Uttarakhand at a time when the ruling Bharatiya Janata Party (BJP) is preparing for the state Assembly polls due early next year. His principal challenge will be to ensure the party another term in office.

Earlier in the day, Rawat was elected as the leader of the Uttarakhand BJP legislature party, which came as a surprise to many as his name was not among the nearly half-a-dozen names doing the rounds in the media over the last few days as contenders for the top post.

Rawat’s supporters burst into celebrations and lifted the 56-year-old leader on their shoulders amid the beating of drums as his name was announced by outgoing chief minister Trivendra Singh Rawat as the leader of the legislature party after its meeting at the state BJP office at Balbir Road.

After the celebrations at the state party office in the presence of senior leaders, MLAs and MPs, Rawat went to the Raj Bhawan to meet the governor and stake his claim to form the government.

After being congratulated by the outgoing chief minister and the BJP’s central observer and national vice-president Raman Singh, Rawat thanked the top leadership of the saffron party for giving him the new responsibility.

“I am a small party worker from a village. I had never imagined that I will be a given an opportunity like this by the party. I hope that with everyone’s cooperation and blessings, I will fulfil the expectations from me,” he said.

Though Rawat has held important organisational positions both in the state and at the Centre, he is a first-time MP.

He defeated his political mentor and BJP veteran Bhuvan Chandra Khanduri’s son Manish Khanduri of the Congress by over three lakh votes to win from the Pauri Garhwal seat in the 2019 Lok Sabha polls.

Former Chhattisgarh chief minister Raman Singh, whose report to the central leadership of the party set in motion the process of leadership change in the hill state, said, “With the kind of challenges facing Uttarakhand, it has got a good leader.”

Union Education Minister Ramesh Pokhriyal “Nishank”, who was also being considered a contender for the post, said Rawat was a good choice.

“Tirath Singh Rawat is indeed a good choice. Now the BJP is sure to win the 2022 Assembly polls in Uttarakhand,” he told reporters after coming out of the state party office.

Rawat’s appointment as the new chief minister of Uttarakhand puts an end to the momentous political developments in the state over the last few days that started with a sudden meeting of the state BJP’s core committee here in the presence of central party observers last Saturday, triggering the speculation about a change of leadership in the state.