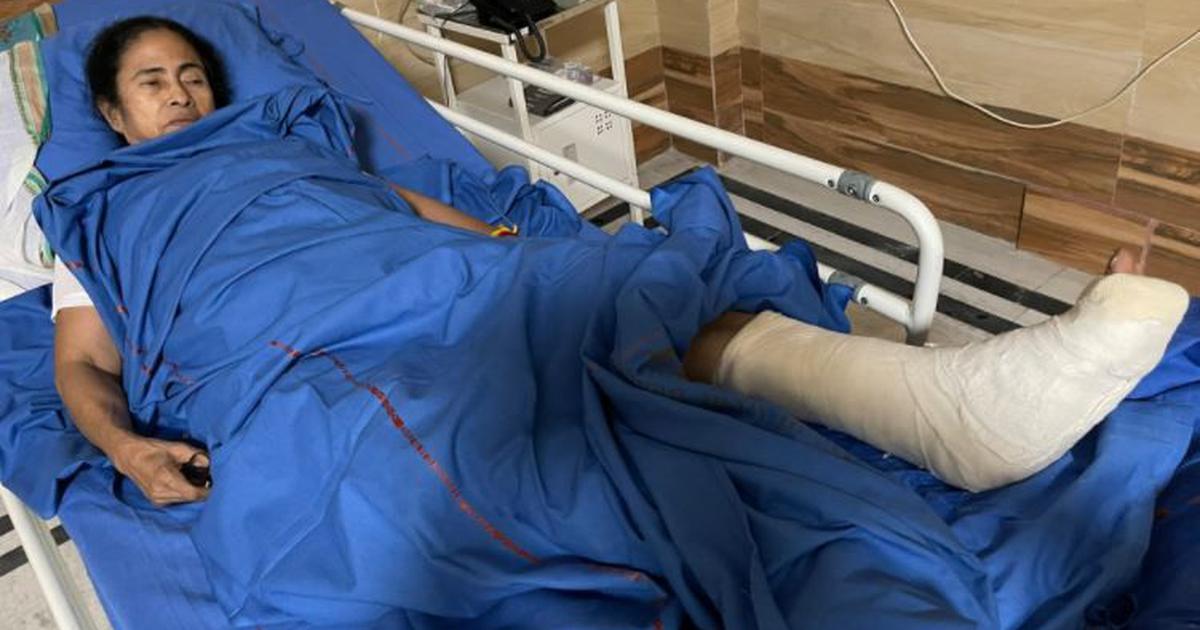 KOLKATA: Mamata Banerjee has earned for herself the image of the gutsy political leader, who has weathered physical attacks and injuries in her four-decade- long career to emerge stronger in her public life.

Her comebacks after such incidents saw her attacking her opposition with greater ferocity.

The TMC supremo’s image as a fearless fighter, endowed with nerves of steel and political acumen who can become one with legions of her supporters, took shape after one such deadly attack when she was hit on the head by a CPI-M youth leader in 1990 and had to be confined to a hospital bed for an entire month.

Again in July 1993 Banerjee, then a Youth Congress member, was beaten up by the police when she lead a rally to Writers’ Buildings, the erstwhile secretariat, demanding voter photo identity cards.

The rallyists had clashed with the police prompting the force to fire killing 14 Youth Congress activists.

Banerjee was beaten up and then too she was under treatment in the hospital for a few weeks.

The Bengal chief minister, who is presently facing one of the toughest political battles of her career, is in hospital yet again with her leg in a cast and complaints of chest pain after being injured in an alleged attack on Wednesday night at Nandigram hours after she filed her nomination for the seat.

Banerjee has said that she was attacked by four to five men on that day.

The battle is crucial this time as BJP, which has emerged as the main opposition, has thrown down the gauntlet and aims to stop her from returning to power for the third straight time.

Nandigram is where she will take on her former protege and now BJP leader Suvendu Adhikari. The place had played a significant role in her career as the historic anti-farmland acquisition movement led by her party there in 2007 in the face of violence and police bullets saw her emerging as a giant slayer.

Riding the crest of the movement, she had led TMC to defeat the longest serving democratically elected communist regime of the world in 2011. The CPI-M;led Left Front had to bite the dust that year in West Bengal after helming the the state for 34 long years.

A quick look at the 66-year-old leader’s political journey in the mid-1970s shows how injuries and physical assaults have shaped her political career over the years.

Banerjee, then Youth Congress leader, first came into the limelight after defeating CPI(M) stalwart and former Lok Sabha speaker Somnath Chatterjee from Jadavpur Lok Sabha constituency in 1984 riding the sympathy wave following the assassination of Indira Gandhi. She, however, lost the 1989 Parliamentary polls.

The attack on her on August 16, 1990 by DYFI leader Lalu Alam who hit her on the head with a stick had taken place at Hazra crossing in the city, the scene of many of her agitations, near her Kalighat residence.

The attack had fractured her skull. The incident had made her a household name in the state and one of the tallest mass leaders of West Bengal Congress on the same pedestal as stalwarts like A B A Ghani Khan Chowdhury, Priya Ranjan Dasmunsi and Somen Mitra. Banerjee was in her 30s then.

Three years later in January 1993, Banerjee, then president of the state Youth Congress, had stormed into Writers’ Buildings with a hearing-and speech-impaired girl heavily pregnant after being raped by a CPI-M man.

She had led a three-hour-long dharna in front of the chambers of the then chief minister Jyoti Basu alleging that the rapist had not been arrested because of his political affiliations.

Banerjee had sat with the victim on the floor virtually laying a seige on the chief minister’s office demanding immediate arrest of the rapist and an audience from Basu.

After the police failed to persuade her, a huge contingent of the force had reached Writers’ Buildings, dragged her by the hair, put her in a prison van and whisked her to the nearby Lalbazar central police lock up.

In 2000-01, just two years after she broke away from the Congress and formed Trinamool Congress, her vehicle was repeatedly attacked at Keshpur and Chamakaitala in West Midnapore district, where several TMC workers were killed during the bloody turf war between the party and CPI(M).

Crude bombs were hurled at her car in 2001 whe she visited Choto Angaria in West Midnapore where 11 workers of her party had been killed in political clashes.

In 2006 and 2007 Banerjee was attacked on several occasions by alleged CPI(M) goons who threw bombs and fired at her car to stop her entry into Nandigram – then a battlefield due to the anti-farm land acquisition movement.

In 2006 during her protest outside the office of the block development officer at Singur, she was dragged by the police and removed from the spot.

In 2010 during her tenure as Railway Minister, a car in Banerjee’s convoy was hit by a truck. The TMC supremo was returning from a rally at the then Maoist bastion of Lalgarh and had alleged that it was an attempt on her life.

Such incidents, however, did not occur since TMC came to power in 2011 and Banerjee became the chief minister until Wednesday’s attack at Nandigram.

The attacks on her had been greeted with derision by her political opponents.

CPI-M had on several occasions alleged that Banerjee had herself scripted the “dramas” of being attacked to gain sympathy.

The TMC has claimed that Wednesday’s incident was a “well planned conspiracy” by BJP to “remove” her from the poll campaign.

“Mamata Banerjee is a fighter. The more you attack her she makes a comeback with more ferocity,” TMC leader Sougata Roy said.

Banerjee has described herself as a “street fighter” many times in the past.

“Many people don’t want her to campaign for the elections. They want her to be removed from their path. The BJP should be ashamed that it has stooped so low that its supporters are attacking a woman,” Roy said.

The BJP has denied the allegation and said Banerjee is only trying to get sympathy votes.

West Bengal BJP president Dilip Ghosh on Thursday demanded a CBI probe into the attack on Banerjee at Nandigram saying that it needs to be seen whether the incident was a “well-scripted drama” to garner votes.

“The people of the state have seen such a drama earlier too”, he added.

The Congress too has been critical about the alleged attack on Banerjee at Nandigram.

Its state party president Adhir Ranjan Chowdhury had on Wednesday accused her of resorting to “hypocrisy and theatrics” to gain public sympathy ahead of the assembly polls.

Chowdhury, who is also the Congress’ leader in Lok Sabha, said Banerjee is “feeling the heat” in Nandigram and is thus resorting to “stunts and drama”.