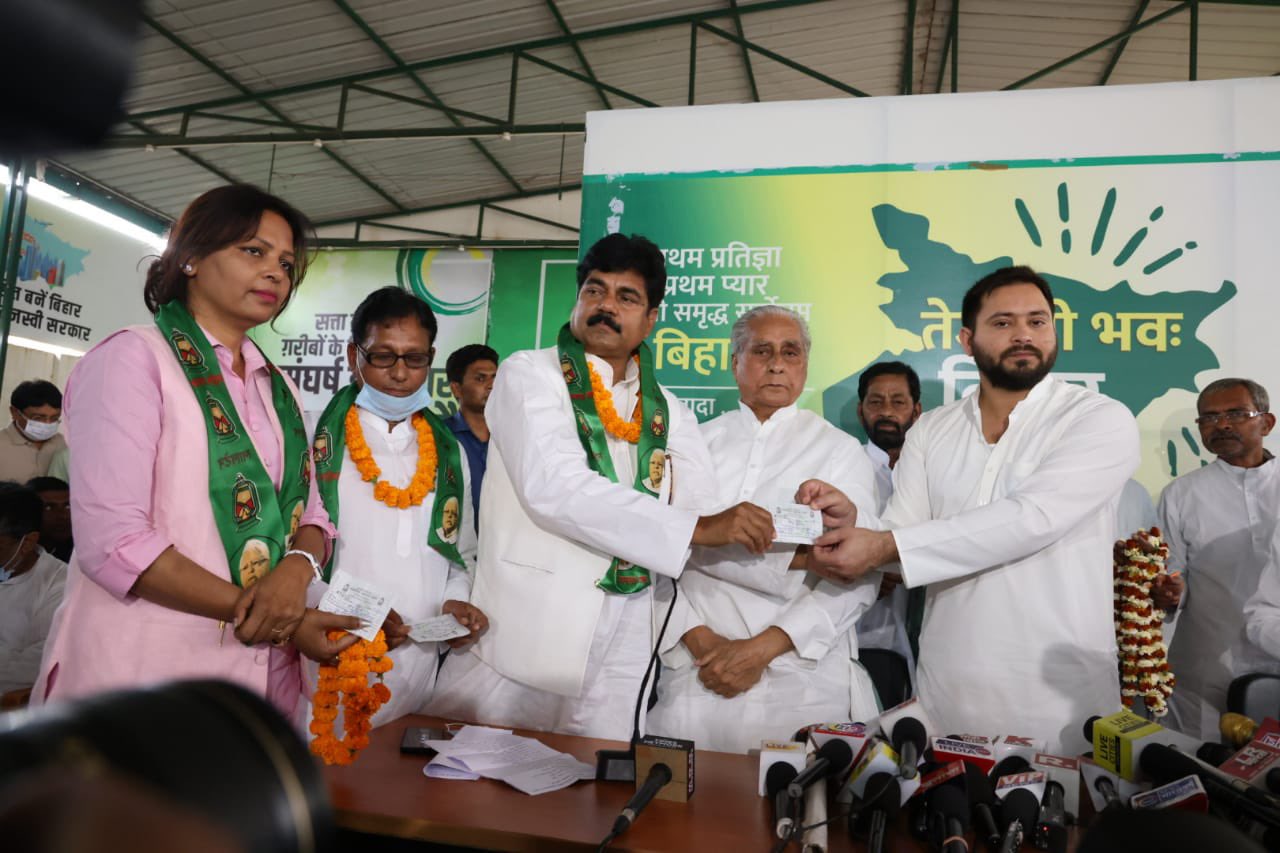 The development came barely a day before the RLSP’s scheduled meetings of national and state executives over the next couple of days which is expected to culminate in Kushwaha’s announcement of return to the NDA and, possibly, a merger with Chief Minister Nitish Kumar’s Janata Dal (United).

Altogether, 35 people from the RLSP jumped ship, most of them holding state-level posts in Bihar and in adjoining Jharkhand where the party has negligible presence besides district level functionaries, mostly from districts like Munger and Patna.

Tejashwi Yadav, who had an axe to grind against Kushwaha ever since he deserted the Grand Alliance helmed by RJD just ahead of the assembly polls, took the opportunity to vent his anger.

Recalling the RLSP’s protests against the  Kumar government in the past few years on issues like education, Yadav quipped, “perhaps Kushwaha is now of the view that things have suddenly improved”.

A former protege of Kumar, Kushwaha had quit the JD(U) in 2013 to float his own outfit and aligned with the NDA in the 2014 general elections which the Bihar chief minister had contested while remaining outside the BJP-led coalition.

Riding the PM Modi wave, Kushwaha’s fledgling party ended up winning three seats and the RLSP founder was rewarded with a berth in the Union council of ministers where he served as the Minister of State for Human Resource Development (HRD).

After Mr Kumar’s return to the NDA in 2017, Kushwaha was understood to have grown anxious about his possible loss of clout in the coalition and the RJD-Congress combine, having weaned away HAM president and former chief minister Jitan Ram Manjhi, begun holding out olive branches to the RLSP supremo.

Kushwaha’s exit from the NDA, which also made him give up the ministerial post, materialised a couple of months before schedule for the 2019 Lok Sabha polls was announced.

The RLSP, like rest of the Grand Alliance, flunked at the hustings but Kushwaha, who appeared to have burnt his bridges with the NDA in general and the Bihar chief minister in particular, chose to hang on.

A change of mind took place for Kushwaha in the run up to the assembly elections last year when Manjhi returned to the NDA, patching up with Kumar.

A return to the NDA seemed to have been worked out for the RLSP by Kushwaha’s key aide Madhaw Anand but the OBC Koeri leader drifted once again and ended up having a truck with parties like Mayawatis BSP and Asaduddin Owaisis AIMIM.

Kushwaha was projected as the “Chief Ministerial candidate” of the hurriedly cobbled alliance though his party, which contested close to 100 seats, suffered the embarrassment of drawing a blank.

Post-elections, Kumar has been busy consolidating his hold over the Kurmi-Koeri-Kushwaha vote bank in the wake of his JD(U)’s dismal performance.

The RLSP chief is understood to have sensed an opportunity and sent feelers to the JD(U) camp through emissaries as well as during his numerous meetings with Kumar in the recent past.

The RLSP chief, however, refrained from revealing his cards when asked about the same at the party’s foundation day celebrations last week.

The hitch, according to RLSP sources, has been over whether Kushwaha shall be accommodated as an MLC and a member of the state cabinet or he shall settle for a top post in the JD(U) with a key aide or his wife Snehlata entering the legislative council and, possibly at a later stage, getting a cabinet berth.