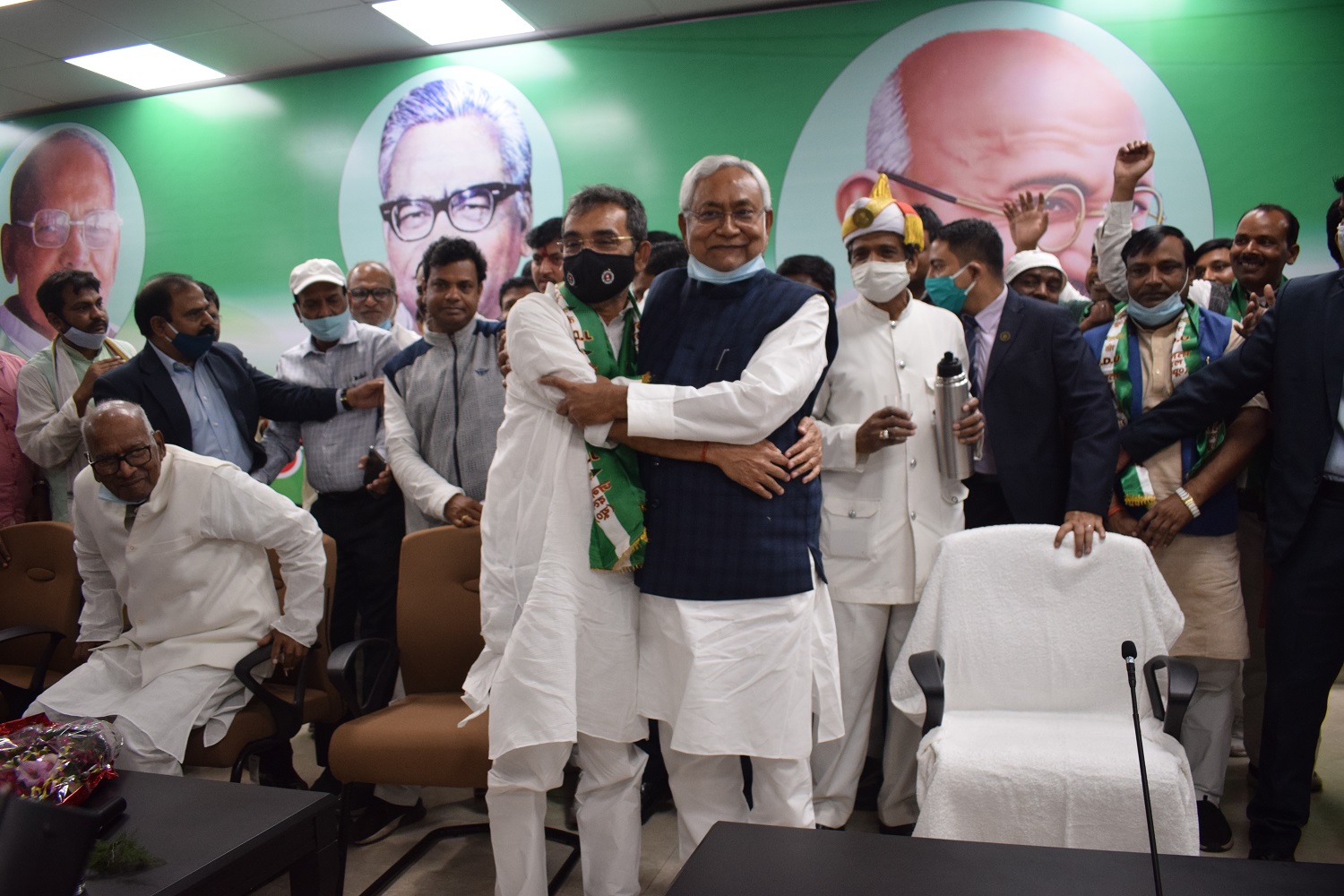 PATNA: Bihar’s ruling JD(U) on Sunday received a shot in the arm with the merger of RLSP of Upendra Kushwaha, a former protege of Chief Minister Nitish Kumar who came back under his wing nine years after having fallen apart.

The merger took place at the JD(U) state headquarters here, where the chief minister welcomed Kushwaha, a former Union minister, by presenting him with a bouquet.

Top JD(U) leaders like Rajeev Ranjan Singh alias Lalan, Sanjay Kumar Jha and Vashisth Narayan Singh and key office bearers of the now dissolved RLSP like Madhaw Anand and Fazl Imam Mallick were also present.The much-anticipated reunion, likely to be mutually beneficial, comes on the back of hectic parleys between the two leaders in the recent past. Soon after he was inducted into the JD(U), Kumar announced Kushwaha’s appointment as the national parliamentary board president “with immediate effect”.

Kushwaha, who brings on table his support base of the sizeable Koeri caste, vowed to make the JD(U) “the number one party” in Bihar and said that after having been witness to “many ups and downs” as the RLSP founding chief, he looked forward to making use of his experience under the guidance of Nitish Kumar.

Kushwaha was in political wilderness since his exit from NDA in 2017. Feeling “stifled” in the RJD-led Grand Alliance, he quit the coalition ahead of the assembly elections last year and ended up facing political isolation notwithstanding the support of his Koeri community which is the second most populous OBC group in Bihar after the Yadavas.

Kumar, who is serving his fourth consecutive term in power, has suffered a diminution in clout on account of the JD(U)’s unimpressive performance in the assembly elections which saw him lose the upper hand to the BJP.

The chief minister, who has since relinquished the post of the JD(U) president, nonetheless enjoys supreme control over the party and has been busy consolidating his Luv-Kush (Kurmi-Koeri) base, in a bid to hold his own against the BJP juggernaut.

Kumar himself is a Kurmi, a caste that is numerically small but very influential by virtue of being economically and educationally advanced.

After cutting his teeth as a youth leader in the Lok Dal and Janata Dal, Kushwaha went on to become the deputy leader in the state assembly of the Samata Party, a breakaway group which Kumar had formed along with veteran socialist leader George Fernandes.

By 2004, after the JD(U) an entity formed with the merger of Samata Party with Janata Dal’s splinter group headed by Sharad Yadav emerged as the senior NDA partner, Kushwaha became the Leader of the Opposition.

He got expelled from the JD(U) for anti-party activities in 2007, but was re-inducted two years later. He was rewarded with a Rajya Sabha seat but ambition got the better of him in 2013 when he fell apart with Kumar once again and floated the Rashtriya Lok Samata Party.

The BJP-led NDA, which was then desperate for new allies in the wake of the exit of Kumar, welcomed Kushwaha and his fledgling party won three seats in the 2014 Lok Sabha polls, riding the Modi wave.

Kushwaha himself was appointed the Minister of State for HRD, a post he held till his exit from the NDA.

Meanwhile, Ashok Choudhary, one of the closest aides of the chief minister, summed up the buoyancy in JD(U) camp.

“It is being increasingly clear to all that the future belongs to the brand of politics popularised by Nitish Kumar.

In the recent past, many have crossed over. Upendra Kushwaha’s return adds another chapter. In future, many more may follow,” he said.