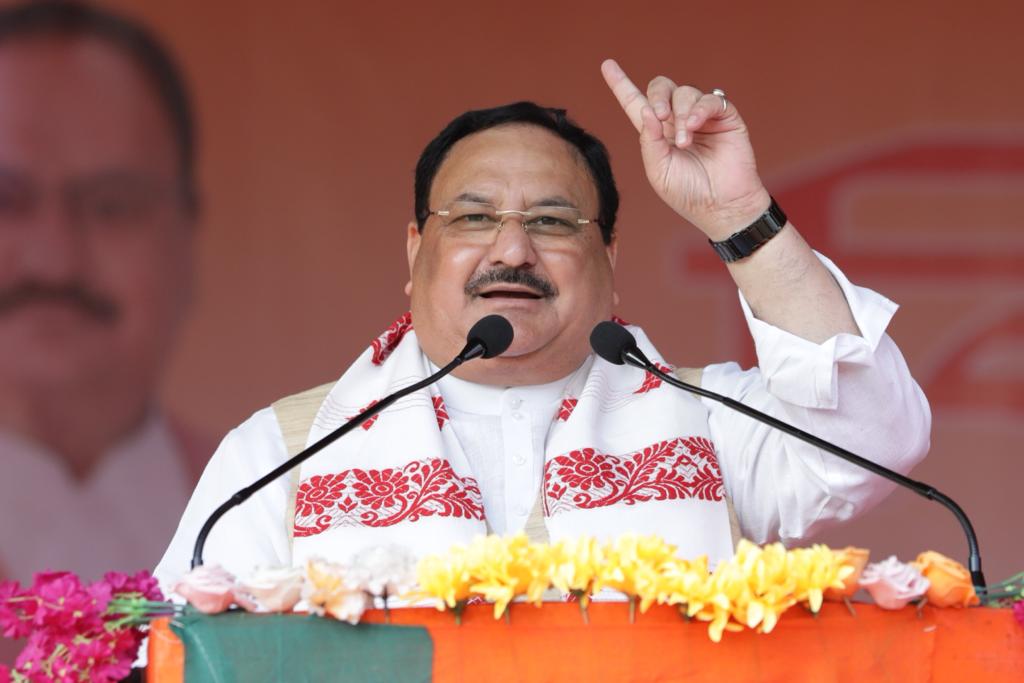 SOOTEA/DHAKUAKHANA: BJP president J P Nadda on Monday slammed the Congress, saying it is capable of providing only one guarantee that is for corruption wherever it comes to power, and accused it of “embracing” the AIUDF in Assam, the party which had once been rejected by Tarun Gogoi, Congress veteran and former chief minister.

Gogoi had asked in a dismissive manner “Who is Ajmal” (implying AIDUF president Badruddin Ajmal) when asked about a possible alliance with the party during 2006 assembly polls and now the Congress describes AIDUF as its “friend and brother,” Nadda said at a poll rally in Sootea.

Prior to that Muslim migrants in the state were considered to be the vote bank of the Congress.

“Politics and power are really strange and to achieve it some parties can cross all principles and limits,” the BJP leader said.

The Congress, which was in power for 15 years in the northeastern state since 2001, has formed a Grand Alliance comprising the AIUDF and six other parties to fight the election for the 126-member assembly against the BJP-led NDA.

Speaking on the alliance with the AIUDF, Nadda told another rally at Barchalla, the Congress is ready to do anything for power but “I am sure that the late chief minister’s (Tarun Gogoi) soul will not rest in peace following this step taken by the party.

“I also wonder what his son (Gaurav Gogoi, Congress MP) has to say about this. Is this the way to carry forward his father’s legacy?” he asked.

The BJP leader said that the country was heading towards ‘Congress-Mukt Bharat’ (India free of Congress).

“There are still a few states left, but soon all will be a part of the NDA,” the BJP leader said.

Speaking at another rally at Dhakuakhana, the BJP president said, many Congress leaders are now coming to Assam and talking about five guarantees.

But the Congress can provide only “corruption guarantee” wherever it comes to power though it has promised five-guarantees in poll-bound Assam, Nadda said.

“For 60 years, Congress leaders only indulged in corruption and so for the last five years, we had to fill up pot-holes, repair roads and convert double lane highways to four and six-lanes”, the BJP president said.

It is the BJP which has a mission and the “Congress is only interested in commission”, the BJP leader alleged.

“It is Prime Minister Narendra Modi who with his initiatives has joined Assam and the Northeast with Mainstream India”, Nadda said.

Assam has moved ahead along the path of development due to the efforts of the Prime Minister which the Sarbananda Sonowal-led BJP government in Assam has executed in the state.

He said, if one draws a camparison between the long spell of Congress rule in Assam and 60 months of the Sarbananda Sonowal-led NDA government, the balance will tilt in favour of the present dispensation.

“We assure you that all pending works will be completed in the next five years”, he said.

It is the saffron party which has ensured peace in Assam by signing an agreement with the four factions of the National Democratic Front of Boroland (NDFB) following which 3,000 insurgents surrendered arms, Nadda said.

“For 50 years, the problem had existed and thousands of people had been killed. The Prime Minister and the Union Home Minister amicably resolved the issue by ensuring that the Bodos continue to live in Assam, peace returns to the state and announced a package of Rs 1,500 crore for the development of the area and its people.

“It was also with the blessings of Modiji that the setting up of All India Institute of Medical Sciences (AIIMS) was sanctioned when I was the health minister and after two years, people do not have to go Delhi as the same treatment will be available in Assam,” the BJP president said.

Assam will be free from floods in the next five years as “satellite imagery has been done and ponds, lakes and other water-bodies will be created in a scientfic manner to ensure that people and their livelihoods are not affected,” he said.

Speaking on India’s handling of coronavirus outbreak, he praised the “able leadership” of the prime minister for effective handling of the crisis when many of the advanced countries were grappling with it, he claimed.

“Two vaccines are being produced in the country and we are not only vaccinating our own people but also sending these to 74 countries.

“This is what the Prime Minister’s ‘Atmanirbhar Bharat is all about”, the BJP president said.

Nadda is on a day-long visit to the state to campaign for Naba Kumar Doley at Dhakuakhana, Padma Hazarika at Sootea and Ganesh Kumar Limbu at Barchalla.

“When I was the Union health minister, I was told about the poor health conditions at the tea gardens and proposed setting up dispensaries but due to lack of availability of land, I ensured that more than 150 mobile medical units were sent to tea gardens across the state from Guwahati”, he said.

In an apparent dig at Priyanka Gandhi Vadhra, Nadda said, recently a Congress leader went to a tea garden and plucked leaves but “I was told that this is not the plucking season. These leaders come only for photo sessions”.

In this article:AIUDF, Congress, JP Nadda