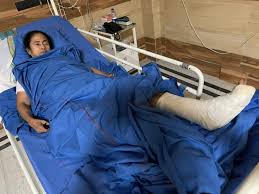 KOLKATA: Mamata Banerjee’s injured leg Monday kicked off a spat between her and Amit Shah, with the wheelchair-bound TMC boss asserting she will fight as long as her “heart beats and vocal cord functions” and the home minister reminding her of the “pain” of the mothers of BJP workers “slain by your goons”.

The two leaders crossed swords as they went stumping in West Bengal.

Shah told an election rally that while the TMC cried conspiracy over the Nandigram incident, the Election Commission had concluded it was not “hamla” (attack) but “haadsa” (accident).

“Wait for a few days, my leg will get better. I will see whether your legs get to move freely on Bengal’s soil,” Banerjee told an election rally in Jhalda, ostensibly trying to get a leg up on the BJP.

“I will continue to fight against the BJP as long as my heart beats and vocal cord functions,” the West Bengal leader, true to her persona of a street fighter politician, asserted.

She said “no conspiracy or injury” can deter her from taking forward her fight against the BJP, which is making a determined bid to dislodge her from power after two successive terms in office.

Shah made light of the injury Banerjee suffered during the alleged attack blamed on the BJP by the state’s ruling party.

“Mamata ji has hurt her leg. But it’s difficult to reach a conclusion about how it happened. Investigation is on.

The TMC claims it was a conspiracy but the Election Commission says it was not ‘hamla’ but a ‘hadsa’.

“I wish her speedy recovery. Didi, you are hurt, you are in pain. It would have been better had you felt the pain the mothers of 130 BJP workers who were killed by TMC goons went through,” he told a public meeting in Ranibandh in Bankura district.

Banerjee suffered injuries on her left leg, hips, arm, chest, neck and shoulder as she fell down, apparently during a crowd surge when she was holding a rally after filing her nomination for the Nandigram seat.

TMC leaders claimed it was the result of a conspiracy by the BJP to “take her life”.

“On March 10, I sustained injuries on my body. Maybe, due to good fortune, I was saved. Some may have thought I will not be able to go out at all with my broken leg, but (for me) people’s wellbeing is far more important than my own pain,” Banerjee, who had Sunday likened herself to a “wounded tiger” that gets more dangerous, asserted.

Is she out on a limb in arguably the toughest election of her political career or will the voters give her the much- needed leg-up, only time will tell.