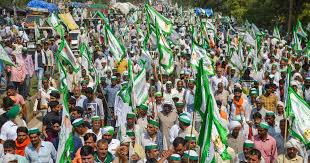 NEW DELHI: The Bharatiya Kisan Union (BKU) has called on youth of Noida adjoining Delhi in western Uttar Pradesh to join a proposed strike on March 26 over issues like unemployment, an office-bearer of the farmers’ union said on Tuesday.

The BKU supporters are camping at Ghazipur on the Delhi-Uttar Pradesh border since November 2020 over demand for repeal of the contentious farm laws and a legal guarantee on the minimum support price (MSP) for crops.

“BKU spokesperson Rakesh Tikait has called on the youth in Noida to join the ‘chakka jam’ on March 26. The BKU members won’t put up any blockade in Noida but we have extended support to the ‘chakka jam’,” BKU’s media in-charge Dharmendra Malik told PTI.

Tikait has called on the youth to join the protest over issues like unemployment, Malik added.

Over the past few weeks, Tikait, the influential BKU leader, has been touring around states to mobilise support for the ongoing farmers’ protest against the Centre over the contentious new laws.

As part of the ongoing stir, the BKU is scheduled to hold protests outside mandis on March 19, while its supporters will sport a yellow-colour turban on March 23 to pay homage to revolutionary freedom fighter Bhagat Singh, Malik said.

On March 26, BKU supporters across the country will participate in a chakka jam from 9 am to 5 pm, while copies of the farm laws will be “burnt” on March 28 in a symbolic protest against the Centre to mark Holi, he added.