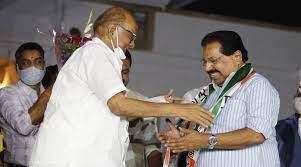 NEW DELHI: Former Congress leader PC Chacko, who quit the party last week, joined the Nationalist Congress Party (NCP) headed by Sharad Pawar on Tuesday and said he was happy to be part of a “functional, active party with a direction”.

Taking a dig at the Congress, Chako said the need of the hour is to forge an alternative to the BJP but he does not see his former party taking that initiative.

“I am happy to be part of a party which is functioning, active and a party moving with a direction,” he told reporters.

Chacko was welcomed into the party-fold by Pawar, senior NCP leaders Praful Patel, Supriya Sule, Sunil Tatkare and others.

After formally joining the NCP, Chacko said the Left Democratic Front (LDF) will return to power in Kerala, which is going to polls on 6 April. The NCP is a constituent in the LDF in Kerala. Chacko said he will start campaigning for the LDF in the southern state.

Announcing his resignation from the Congress last week, Chacko had alleged group interest in deciding the party’s candidates for the upcoming Kerala Assembly polls.

“Today, what is needed is unity of the Opposition. A united opposition should emerge as an alternative to the BJP. I do not see that initiative very much from the party that I was in earlier. I am sure that Pawar sahab, his leadership, contacts will be most effective in forging the unity of the Opposition in the country against the misdeeds of the BJP,” Chacko said.

Pawar said he was welcoming Chacko in the party also on behalf of senior leaders in the LDF.

Chacko recalled his association with Pawar when both of them were in the Congress. Prior to Chacko joining the NCP, Pawar met CPM general secretary Sitaram Yechury.

In this article:Congress, NCP, PC Chacko