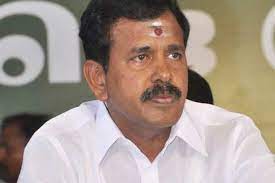 CHENNAI: The ruling AIADMK on Friday expelled its Perundurai legislator and former minister ‘Thoppu’ N D Venkatachalam from the party for filing his nomination from the segment after being denied a ticket to contest the April 6 Assembly polls.

AIADMK top leaders O Panneerselvam and K Palaniswami announced expelling Venkatachalam from the party, the second such ruling party MLA to face the axe for a similar act in as many days.

Venkatachalam had filed his papers seeking re-election from Perundarai in Erode district as an independent on Thursday after he was denied a party ticket.

Venkatachalam was “removed from primary membership of the AIADMK and all responsibilities, for his anti-party activities,” an AIADMK release said.

According to the release by Panneerselvam, AIADMK coordinator and joint coordinator Palaniswami, Venkatachalam was removed as he conducted himself against the party’s policies and brought discredit to it by filing his nomination as an independent against the official candidate.

Also, they urged the cadres to refrain from having any contact with him.

Expressing dissatisfaction over the denial of the party ticket to seek reelection from Perundurai, Venkatachalam, who had represented the constituency twice, filed his papers against AIADMK’s S Jeyakumar.

He is the third MLA from the party to have faced action since the election was announced.

Sattur MLA M S R Rajavarman was expelled from the party on March 11 after he joined T T V Dhinakarans Amma Makkal Munnetra Kazhagam (AMMK) after being denied a ticket to contest again.

Senthamangalam MLA C Chandrasekharan was expelled on Thursday for filing his papers against the AIADMKs official nominee from that constituency.