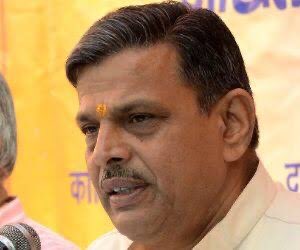 He was until now the Sah-Sarakaryavah (Joint General Secretary) of the Sangh.

The election took place at the two-day annual meeting of the Akhil Bharatiya Pratinidhi Sabha (ABPS), the Sangh’s highest decision-making body that began here on Friday.

Hosabale will replace the 73-year-old Suresh ‘Bhaiyyaji’ Joshi, who was Sarkaryawah for four terms,with each term having three years.

Sarkaryawah post is considered as Sangh’s number 2 in command after Sarsanghchalak (Chief of RSS) which is currently held by Mohan Bhagwat.

Though ABPS is an annual meet held at different places, but every third year it is held at RSS headquarters in Nagpur as election of Sarkaryawah will take place.

However, it was shifted to Bengaluru this time in the wake of surging COVID-19 cases in Maharashtra.

Born inSorab in Shivamogga,Hosabale, aged 65-years, a post graduate in English literature, has grown in Sangh, which he joined in 1968 He was initially associated with the Akhil Bharatiya Vidyarthi Parishad (ABVP), student wing of the RSS, and became an organiser in RSS.