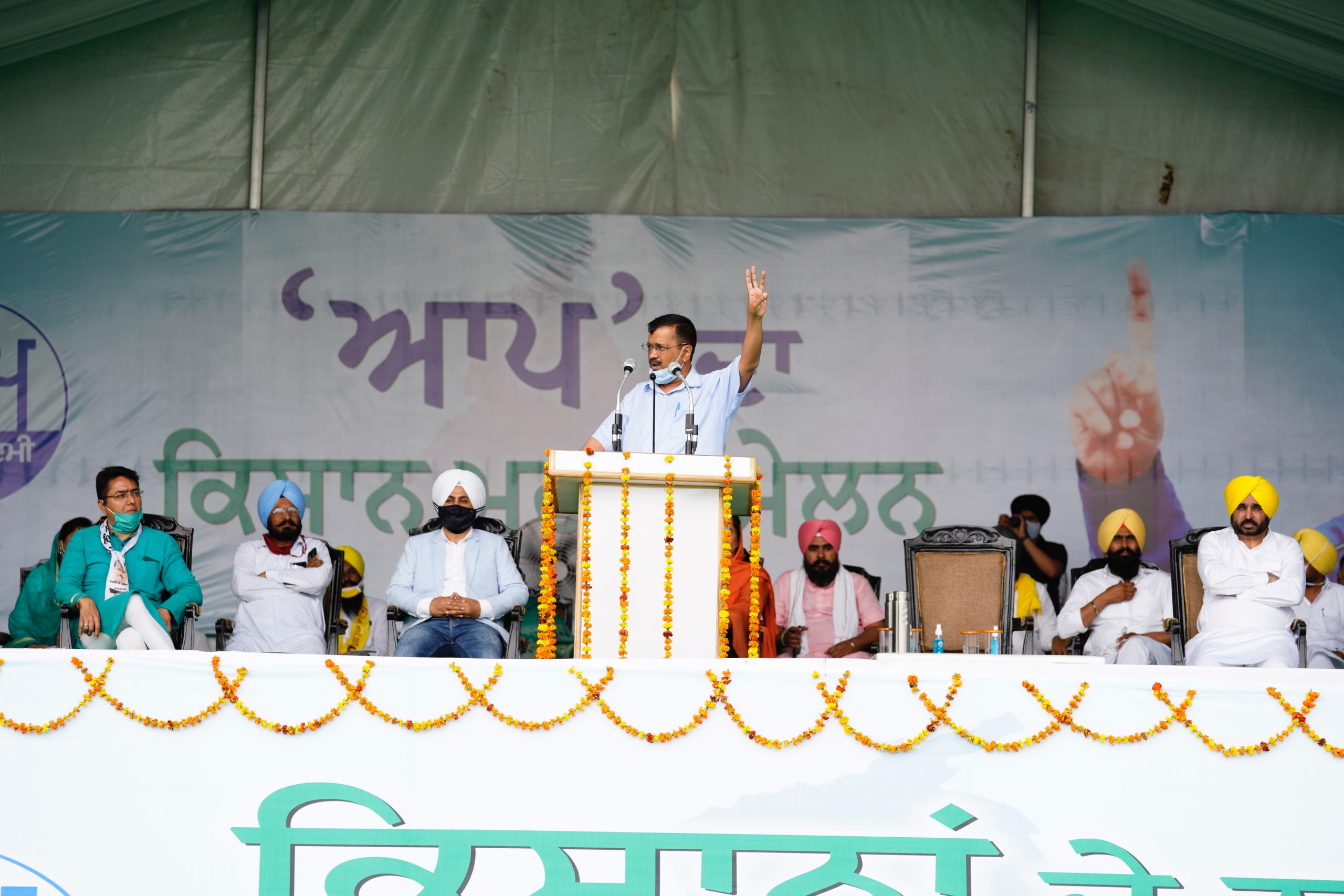 CHANDIGARH: Delhi Chief Minister Arvind Kejriwal on Sunday slammed the Punjab government, alleging that not even a single promise has been honoured in the past four years by it and asked people to take a revenge in the 2022 Assembly polls.

Addressing a Kisan Maha Sammelan held by the Aam Aadmi Party (AAP) at Punjab’s Moga, he told people that his party will always stand shoulder to shoulder with farmers protesting against the Centre’s three farm laws.

He also took on the Centre over the Government of National Capital Territory of Delhi (Amendment) Bill, 2021, alleging that the BJP-led government wants to snatch power from the Chief Minister of Delhi.

Kejriwal earlier arrived at Amritsar and then moved to Baghapurana in Moga for the event.

He said four years ago when the Assembly elections were held, Punjab Chief Minister Amarinder Singh made big promises.

Amarinder Singh had promised job for every household, Kejriwal said, asking the gathering who got employment.

Kejriwal also showed an unemployment allowance card, saying it was given by the Congress to 20 lakh youngsters while promising jobs for each household.

He (Amarinder) had said vote for me and I will give you jobs if voted to power. Today the youth are running pillar to post with these cards, alleged Kejriwal.

Kejriwal urged people not to throw away the jobs cards, saying it will remind them how Amarinder Singh took their votes after “lying” to them.

I want to ask you if somebody deceives you, then what do you do? Usse se badla lete hain (revenge is taken from him). Captain Sahib has deceived you. Will revenge be taken from him after one year or not, he asked apparently referring to the Assembly polls next year.

He deceived the entire Punjab. Neither anyone was given a job nor anyone’s loan was waived, he alleged, adding that not even a single promise was fulfilled by the chief minister.

Kejriwal promised that if voted to power, jobs will be given to those who have the employment card.

Until the job is given, unemployment allowance will be given, he promised.

Kejriwal also claimed that his party honoured each promise made with residents of the national capital.

In Delhi, there is no power cut. Power is given 24 hours a day. Seventy-three per cent people in Delhi do not receive electricity bills. It is a miracle. And in Punjab, there is a huge power bill. If the electricity bill is zero and its supply is 24 hours, should not the bill in Punjab be zero as well. If it is possible in Delhi then why cannot in Punjab,” asked Kejriwal.

He also cited improvement in the condition of government-run hospitals in Delhi, saying no money is charged for treatment and medicines.

He exhorted party workers to visit each village and street to prepare a dream for a “New Punjab”.

We want a Punjab where every farmer, worker, trader and arhtiya is happy, he said expressing confidence that AAP would form the next government in the state.

The fire which you ignited first in Punjab has now spread across the country, he said.

Kejriwal alleged that after the agitating farmers reached the Delhi borders, the Modi-led government had planned to put all of them at nine stadiums by converting these into jails.

Despite pressure on his government, Kejriwal said he rejected the Delhi Police request as farmers’ demands are justified and their agitation was non-violent.

They (Centre) got so angry with me and this is the result of which the Modi government last week brought a law in Parliament, aimed at taking away powers of the Delhi CM, Kejriwal said.

“The powers will be with the Lieutenant Governor. The LG will take all decisions. They want to snatch all our powers, he alleged.

Do not worry. I know how to deal with them and I have been fighting them for the past six years. I will not let them take any action against farmers till I am there, he said, alleging that the Centre tried to defame the farmers’ agitation by calling them ‘Khalistanis’ and terrorists.