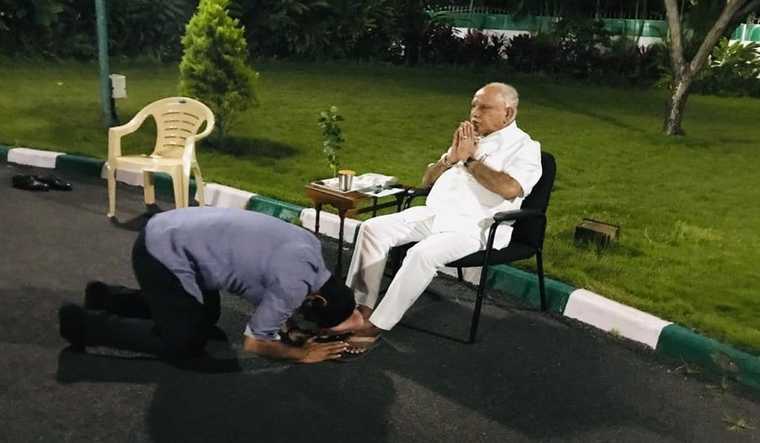 BENGALURU: Karnataka Chief Minister B S Yediyurappa on Sunday charted out a bigger role for his son and BJP state vice-president B Y Vijayendra to make a dent into the Congress and JD(S) citadel in old Mysuru region.

Ruling out fielding Vijayendra from Basavakalyan where assembly bypoll is due on April 17 along with Maski assembly segment and Belagavi Lok Sabha segment, Yediyurappa said his son would camp in Mysuru to strengthen the party base.

“There is no element of truth in fielding Vijayendra from Basavakalyan. Seniors have the expectations that he should go to Mysuru and reside there to cover four to five districts,” Yediyurappa told reporters at Sindhanur Taluk in Raichur district.

The Chief Minister said Vijayendra would camp in Mysuru after the bypolls are over.

“If he works in five to six districts around Mysuru in a manner that we get at least 13 to 14 more seats, then we will get at least 135 to 140 seats (in the next assembly elections). This is our expectation,” Yediyurappa added.

Sources in the BJP said the area of focus this time is the Old Mysuru region including Ramanagara, Mandya, Mysuru, Chamarajanagar and Kolar districts where BJP is weak.

Ramanagara and Mandya districts are considered JD(S) citadel for being the Vokkaliga dominated area which the JD(S) first family of former Prime Minister H D Deve Gowda belongs to.

The BJP, however, had managed to change the notion with the victory of Dr K C Narayana Gowda from the K R Pet Assembly constituency in Mandya during the December 2019 bypolls.

Vijayendra had played a key role in turning the tables on the JD(S).

On the other hand, Mysuru, Chamarajanagar and Kolar are considered to be Congress bastions.

While JD(S) has a stronghold in Mandya, Ramanagara and Channapatna, Kanakapura and Varuna are Congress bastions.

Varuna had been considered Siddaramaiah’s fort as he had been contesting and winning from there.

The BJP has plans to defeat the stalwart Congress and the JD(S) leaders, a party leader said.

In this article:BJP, Karnataka, Vijayendra, Yediyurappa