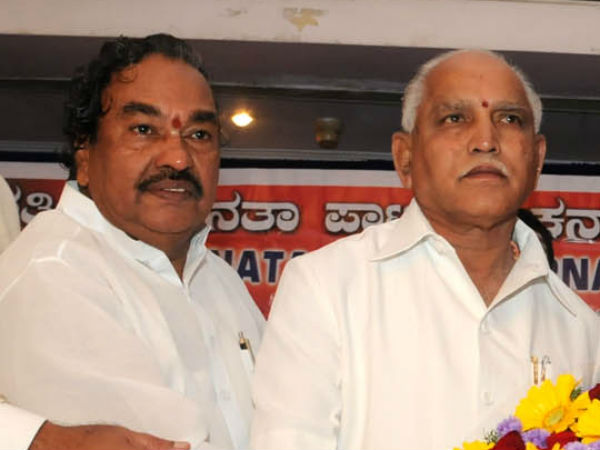 BENGALURU:  The BJP and a group of ministers on Thursday said senior party leader K S Eshwarappa’s act of complaining to the Karnataka Governor Vajubhai Vala against Chief Minister B S Yediyurappa, alleging direct interference in the affairs of his department, was ‘not right’.

The Ministers along with some party legislators, strongly backed the CM, who is yet to break his silence on the issue.

BJP national General Secretary in-charge of Karnataka Arun Singh said Eshwarappa should not have written such a letter, being a senior leader and a Minister.

Speaking to reporters in Delhi, he said, “If any minister has issues at any point of time, he should talk to the Chief Minister, and this is not the way, by writing a letter to the Governor.”

“If he had any issues he should have spoken to the CM, we will discuss and see (what is to be done)..,” he said as he evaded further questions regarding a similar letter written to him by Eshwarappa.

The Chief Minister is said to be upset with Eshwarappa’s move to complain to the Governor and make the letter public.

Eshwarappa, also a former state BJP president, on Wednesday had complained to the Governor against Yediyurappa alleging direct interference in the affairs of his department.

He had submitted a five-page letter on “serious lapses and authoritarian ways of running the administration” by the CM.

A day after the complaint, some senior Ministers in the government and MLAs seen as Yediyurappa loyalists met the CM at his official residence and held discussions.

Pointing out that they had all become ministers under Yediyurappa’s leadership, Revenue Minister R Ashoka said, the matter should have been discussed within and along with the CM.

“This development (of complaining to the Governor) is not good… such things when the government was functioning effectively will cause embarrassment,” he said after meeting the CM.

Noting that despite request from MLAs, the government was not in a position to help by granting more funds as financial situation has taken a hit due to COVID-19, Home Minister Basavaraj Bommai said as the situation slightly improved the Chief Minister on the request of legislators based on the requirement has released funds.

Eshwarappa should have discussed with Yediyurappa and resolved issues if any, he said.

Administrative matters should be resolved within the government and it was not right to take it to the Governor.

“ours is a disciplined party and the discipline should not be violated….Eshwarappa should discuss with the CM.”

Health Minister K Sudhakar said Yediyurappa was their top leader chosen by the high command and MLAs, and this development has caused embarrassment to the government and the party.

Averring that the CM has powers and there was nothing wrong in what he did, Sudhakar said Eshwarappa who also a senior leader could have resolved if he had any issues in 5 minutes by discussing with the CM.

Agriculture Minister B C Patil said Eshwarappa is a senior leader and he should be guiding us.

He should have resolved the issue within the cabinet by discussing it with the CM, instead of going to the Governor and making it public was not right.

Eshwarappa in his letter to the Governor has listed out instances like the Chief Minister sanctioning huge funds on the request of MLAs to the tune of Rs 774 crore under RDPR Department ignoring him, also works worth Rs 460 crore was sanctioned by bypassing him.

Once considered close to each other, the “distance” between Eshwarappa and Yediyurappa have grown over the years.

Ahead of 2018 assembly polls, Eshwarappa had associated himself with the ‘Rayanna Brigade’, which was seen as a move to challenge Yediyurappa’s style of functioning, then as the BJP state President.

Accusing Eshwarappa of embarrassing the government and the party, as done during the assembly polls by organising “Rayanna Brigade”, CM’s political secretary and MLA M P Renukacharya asked, “when people of your stature do such things, against whom should we take disciplinary action?”

A meeting of legislators will be called and they shall meet Arun Singh, BJP state president Nalin Kumar Kateel, National President J P Nadda, also Prime Minister Modi, and union Home Minister Amit Shah, he said adding they have records about how much funds were sanctioned to whom.

MLAs A S Patil Nadahalli and Madal Virupakshappa said CM came to their help by sanctioning funds after they brought issues to his notice recently.

Backing Yediyurappa, the MLAs said they stood by him.

“He will remain as CM and will lead us during the next election also,” they added.