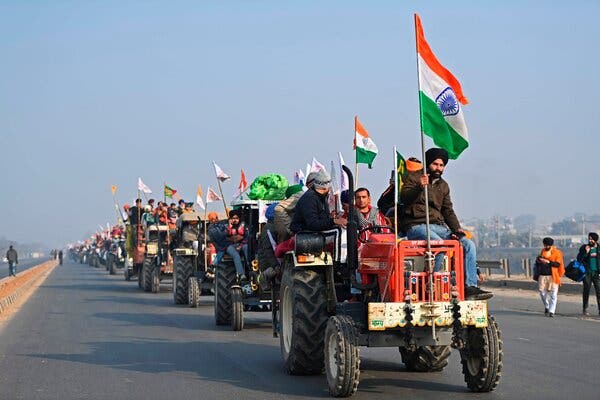 NEW DELHI: Public streets should not be blocked , observed the Supreme Court on Friday while hearing a plea of a Noida-based woman alleging difficulties in commuting to Delhi for work due to road blockades by protesting farmers.

A bench comprising justices Sanjay Kishan Kaul and Hemant Gupta took note of the reply of Delhi Police Commissioner on the plea and said for proper adjudication, the governments of Uttar Pradesh and Haryana are also needed to be made parties.

Without referring to the ongoing farmers’ protest against the three agri laws, the bench said, “We are not concerned with how you resolve this issue, whether politically, administratively or judicially. But, we have said this before that roads should not be blocked. This is a single mother who has to face many issues because of blocked roads”.

In the hearing conducted through video conferencing, the bench said, “public streets should not be blocked” and this has been held repeatedly in previous orders of the top court.

Earlier, a bench headed by Justice Kaul, in its judgement on pleas against blockade of road at Shaheen Bagh here during the anti-CAA protest, had said that occupying public places for protests is not acceptable and such a space cannot be occupied “indefinitely”.

The bench on Friday was hearing a plea of Monicca Agarwaal who had alleged that her commute from Noida to Delhi was taking her two hours instead of the usual 20 minutes due to blockade.

Solicitor General Tushar Mehta, appearing for Delhi government, said besides Delhi police, Uttar Pradesh and Haryana be made parties and the counsel for these states would be appearing in the hearing.

The court, which made Uttar Pradesh and Haryana as parties, has now fixed the matter for further hearing on April 19.

Earlier, the bench had issued notice to the Delhi police on the plea in which the woman had said that she stays in Noida and has to travel to Delhi because she was doing the job of marketing.

It is her say that she is a single parent and also has some medical issues and it has become a nightmare to travel to Delhi where it is taking two hours instead of normal 20 minutes. She contends that despite the various directions passed by this Court to keep the to and fro passage clear (the roads), the same still does not happen, the bench had noted.

We consider it appropriate to issue notice to the respondents to ensure that the road area is kept clear so that the passage from one place to other is not affected. A copy of the order to accompany the notice, it had said.