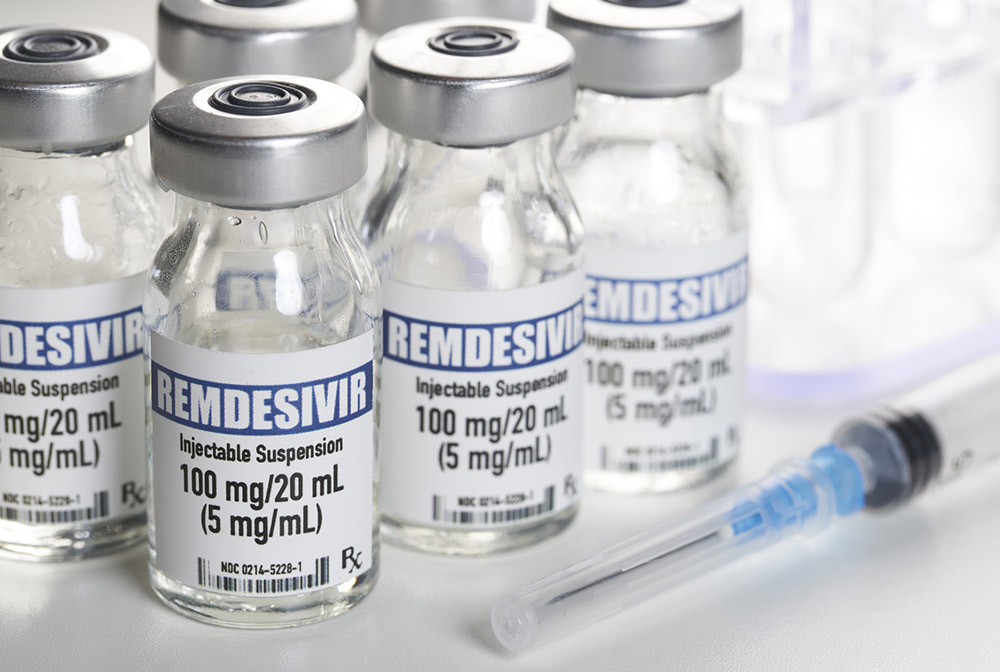 Remdesivir, the only drug cleared to treat Covid-19. It is a generic drug and not a brand name. Fake lable created by photographer.

NEW DELHI: The Shiv Sena on Monday slammed BJP leaders Devendra Fadnavis and Pravin Darekar for objecting to Mumbai police’s grilling of a pharma firm’s top executive over alleged stocking of Remdesivir vials, and wondered if there was a conspiracy to disturb the law and health order.

An editorial in the Sena mouthpiece ‘Saamana’ accused the BJP of having a clear agenda that the Maharashtra government should fail in handling the COVID-19 situation, and charged it with making persistent efforts in that direction with the help of the Centre.

It said the Maharashtra government and the opposition should be unanimous at least on the issue of saving lives of people and no one should seek political mileage out of pyres of people dying for want of the drug, which is in high demand for treating COVID-19 patients.

Mumbai police questioned a pharma company director on Saturday following information that thousands of vials of Remdesivir were to be flown out of the country, despite a ban on its export.

On learning that the company director was being questioned, former chief minister Fadnavis and another state BJP leader Darekar had rushed to the police station.

They said the BJP was reaching out to pharma companies due to the shortage of Remdesivir in the state.

Fadnavis said it was their sincere attempt to get Remdesivar for Maharashtra.

However, the editorial in ‘Saamana’ on Monday alleged that politics is being played on the issue of supply of oxygen and Remdesivir injections for treating COVID-19 patients.

It said the Maharashtra government was not getting the Remdesivir injections, but BJP leaders were purchasing them unilaterally from pharma companies.

It never happened in Maharashtra earlier that the Leader of Opposition advocated for a pharma company official instead of the state, the Sena said.

“Isn’t there a conspiracy to trouble the law and health order?” it asked.

The Sena claimed it is a “crime” on part of the companies to make available stock of the injections to the BJP unilaterally.

It also questioned the BJP’s criticism of the government after the police exposed hoarding and black marketing by the companies.

“What can the opposition leaders in the Assembly and Council rushing to a police station mid-night to seek release of a pharma company official be called?” the Shiv Sena asked.

The COVID-19 patients in Maharashtra and the country are feeling suffocated due to lack of oxygen and funeral pyres have been lit for the want of Remdesivir, it said.

“Nobody should heat up (their) political pans on these pyres. The government and the opposition should behave unanimously at least on this issue,” the Marathi daily said.

Union minister Piyush Goyal on Saturday said Maharashtra has so far received the highest quantity of oxygen in India and the Centre is in regular touch with state governments to assess their needs.

Referring to it, the Shiv Sena asked whether the Centre was doing any favour to Maharashtra by giving the highest quantity of oxygen.

Maharashtra is making the highest contribution to the Centre’s coffers, the editorial said, adding that Delhi (the central government) will need oxygen support if this supply (of tax payment) is stopped (from the state).

“…when Maharashtra is facing a crisis, the Union minister is troubling Maharashtra by giving an account of how much has been given and taken (to the state). This is sort of staining the humanity,” it alleged.