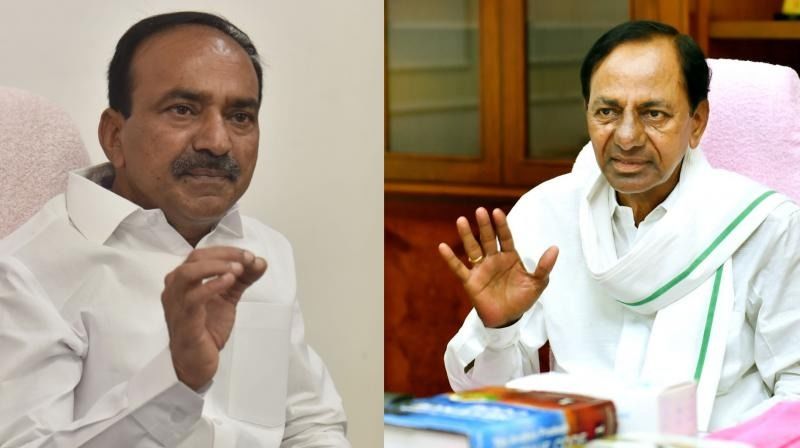 NEW DELHI: SA day after he was dropped from council of ministers over allegations of land encroachment, Eatala Rajender hit back at Chief Minister K. Chandrasekhar Rao asking him if link road to his farm house was not laid illegally through assigned and private lands.

Addressing a news conference here on Monday, Rajender alleged that the chief minister was using all institutions under his control to target him. He, however, made it clear that he was not the one to be cowed down.

“I am not scared by threats of arrests and cases. You have deployed hundreds of policemen around my house. Book whatever case you want to book against me. I will approach the court,” he said.

Rajender also told KCR, as the chief minister is popularly known, that no minister is wholeheartedly supporting him.

He said no minister was with KCR out of respect and they know how he treat those who differ from him.

The chief minister had ordered an inquiry against Rajender on April 30 after some farmers from Medak district complained to him that he encroached their assigned lands for poultry farm.

The next day, the chief minister took away health portfolio from Rajender.

After the receipt of preliminary report from Medak district collector that 66 acres of assigned lands were encroached, Rajender was dropped from cabinet on Sunday.

Denying the allegations that he encroached assigned lands in two villages of Medak district, Rajender said he did no wrong and was ready to face impartial probe into his assets, income and businesses by a sitting judge and not by officials and committees that work under the chief minister.

He pointed out that those who conducted the investigation did not even seek their clarification.

“We neither took five paise assistance from the government nor took five kunta land,” he said.

Rajender alleged that the report by officials against him is full of lies. He said he was not director in Jamuna Hatcheries which was run by his wife and son.

Rajender made it clear that he has no plans to float a new political party.

He said he will decide future course of action after consultation with the people of his constituency Huzurabad.

He claimed that people have the feeling that injustice was done to him. Stating that he worked with KCR for 19 years, Rajender said as the floor leader of the party in the Assembly he always defended the TRS chief.

He said he never worked to bring bad name to the party, government or KCR. He said as the leader of Telangana movement, KCR never supported any wrongdoing.

“Such a leader is today using his power against a small man like me. He is using all departments against me,” said an emotional Rajender.