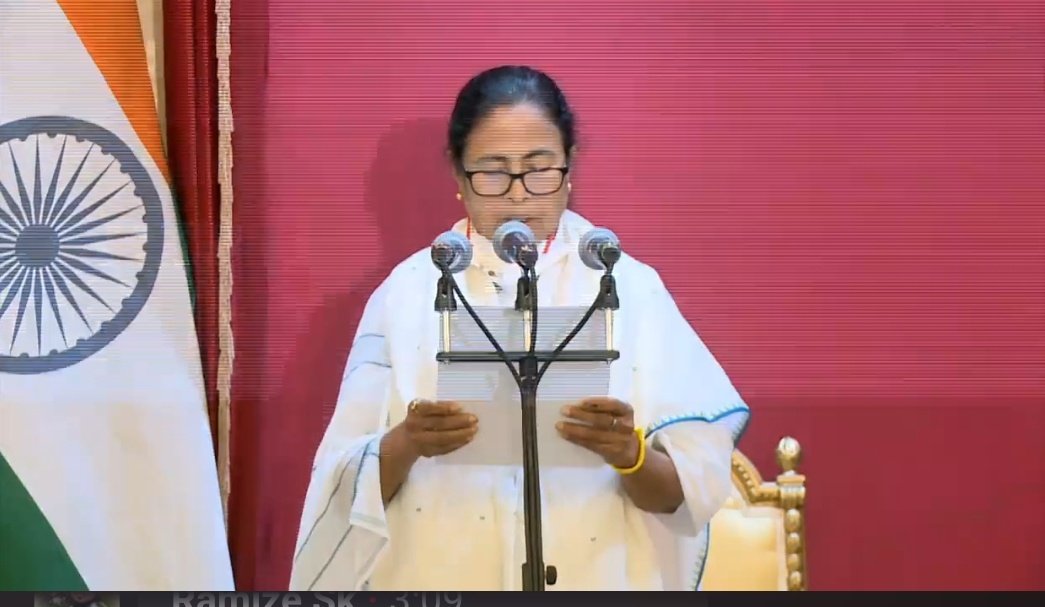 NEW DELHI: TMC supremo Mamata Banerjee was Wednesday sworn-in as the chief minister of West Bengal for the third consecutive term after securing a massive mandate, and vowed to not “give respite” to those behind political violence sweeping the state since the election results were announced.

Governor Jagdeep Dhankhar administered her the oath of office and secrecy at a low-key ceremony at Raj Bhavan held amid the raging COVID pandemic.

She is the 21st chief minister of West Bengal and 8th person to hold the office.

The oath-taking ceremony was held even as the BJP, which has emerged as the main opposition party in the state, held a protest at its Hastings office against attacks on its workers allegedly by the TMC since Sunday night. The party has claimed several of its workers were killed and party offices set on fire and vandalised. Party president J P Nadda and state unit chief Dilip Ghosh were present.

Banerjee alone was sworn-in on Wednesday and her cabinet will be expanded with the induction of other ministers on May 9, the birth anniversary of Bengali cultural icon nobel laureate Rabindranath Tagore, TMC sources said.

“Our first priority is to control the COVID situation,” she said after taking the oath.

Banerjee said she will hold a meeting on the pandemic situation at state secretariat Nabanna soon after leaving Raj Bhavan.

Referring to incidents of violence which have reportedly claimed the lives of several BJP and TMC workers, Banerjee said, “I will tackle law and order from today and deal with these sternly. This is my second priority.”

“We will not give respite to anyone (perpetrators of violence), and do everything to restore law and order,” she told journalists after taking oath.

She urged all political parties to help maintain peace and order.

Congratulating Banerjee on assuming office for a third time, Dhankhar expressed hope and expectation that she will govern the state according to the Constitution and rule of law.

“We are at the moment in a very difficult crisis,” Dhankhar said, adding he has brought the issue of post-poll violence to the notice of the chief minister.

“Our first priority is to end the horrendous and senseless violence that has affected society at large. Post poll violence, if it is retributive, is antithetical to democracy,” said Dhankhar, who has repeatedly pulled up the state government over the violence and has had a running feud with Banerjee over several issues.

The governor said he hopes that the chief minister will, on an urgent basis, take all steps to restore the rule of law and ensure that relief reaches those who have been affected, particularly women and children.

“I would also expect from the new government a new commitment, a new approach of cooperative federalism,” he said, addressing the media after the brief oath-taking ceremony at the Throne Room, as the chief minister stood beside.

He urged Banerjee to rise to the occasion and expressed the hope that she will do it, while contending that it is not usual for a person to get a third term in a row.

“There are occasions when a state faces crisis, we have to rise above partisan interests,” he said, while addressing Banerjee as his sister.

After the governor had concluded, Banerjee said she has taken charge “just now” and that the police administration was run by the Election Commission for three months.

She said some political parties were indulging in atrocities in places where they won.

While the BJP has accused the TMC of targeted attacks against its workers and vandalisation of its offices, the ruling party has also claimed that its supporters were attacked and killed at places where the saffron party won.

Hinting at a change in the police administration, Banerjee said, “I will form a new set up and ensure that no one (indulging in violence) is spared.”

The Election Commission had transferred several police officers during the election process, including the state DGP and ADG (law and order) and SPs of a number of districts.

Banerjee claimed there was inefficiency as the police administration was not under her government for the last three months.

Nadda, meanwhile, led another oath ceremony at the Hastings office of the BJP where its leaders vowed to protect democracy and save the people of West Bengal from the vicious cycle of political violence.

“I am going to districts like North 24 Parganas to be by the side of our members who were at the receiving end of brutal violence not witnessed in Independent India. We want to tell the entire country about this,” Nadda said.

Leaders of opposition parties including the BJP, the Left and the Congress did not attend the ceremony.