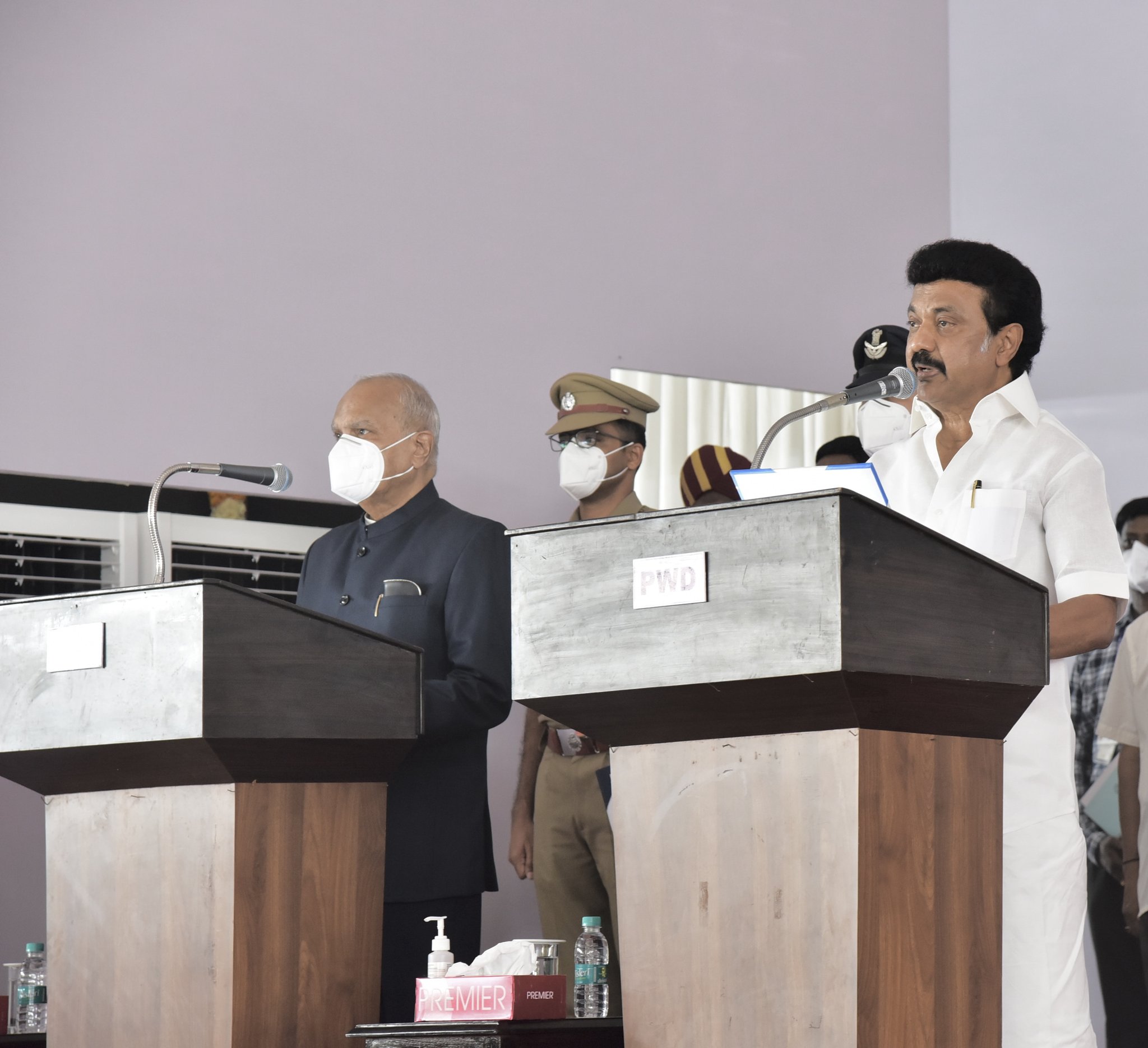 NEW DELHI: DMK president MK Stalin on Friday took oath as the Chief Minister of Tamil Nadu at Raj Bhavan in Chennai. Governor Banwarilal Purohit administered him the oath of office and secrecy. Besides Stalin, 33 ministers also took oath today. Stalin has retained senior leaders like Duraimurugan in the government. 15 of them are ministers for the first time.
Stalin will hold Home and other portfolios including public, general administration, all India services, district revenue officers, special programme implementation and welfare of differently abled persons, according to a release shared by the Raj Bhavan. Stalin, who assumed office as Chief Minister for the first time, said that the names of certain departments have been rechristened. It includes agriculture department which shall now be agriculture and farmers welfare.

Party veteran and general secretary Duraimurugan, who had held portfolios like Public Works during the previous DMK rule (2006-11), would be Minister for Water Resources in charge of irrigation projects and others including mines and minerals. Duraimurugan is among 18 former Ministers who have been inducted in the Cabinet.

Former Chennai Mayor Ma Subramanian and party’s north Chennai strongman, P K Sekarbabu are among the 15 who would be first time Ministers. Subramanian and Sekarbabu have been allocated the departments of Health and Family Welfare and Hindu Religious and Charitable Endowments respectively.

Palanivel Thiagarajan, a former investment banker, has been allocated Finance and Anbil Mahesh Poyyamozhi School Education department. Thiagarajan and Poyyamozhi would be ministers for first time and belong to prominent families that spearheaded the Dravidian movement in Tamil Nadu and also worked for the DMK for long.

The cabinet has two women ministers, P Geetha Jeevan, a former minister, who has been given social welfare and women empowerment and N Kayalvizhi Selvaraj who has been designated Minister for Adi Dravidar Welfare. Selvaraj, who will be a first time minister, had trounced BJP Tamil Nadu unit chief L Murugan from Dharapuram constituency.

V Senthil Balaji, who was a transport minister between 2011 and 2015 during the previous AIADMK rule led by J Jayalalithaa and who joined the DMK in 2018, has been given the electricity department and portfolios of prohibition and excise.

I Periyasamy, who was Revenue Minister in his previous stint in government, has been designated Minister for Cooperation. K Ponmudi has got back the higher education department he had held during 2006-11.

Tiruvannamalai’s party heavyweight, E V Velu, who was Food Minister previously, has been named Minister for Public Works. M R K Panneerselvam, also a former Minister, would now be Minister for Agriculture and Welfare of Farmers.

Thangam Thennarasu, also former Minister, and S Reghupathy, former union mininster of state for environment, would be ministers for industries and law respectively.

K R Periakaruppan, T M Anbarasan, M P Saminathan, all former Ministers, have also been named ministers and allotted the departments of Rural Developement, Rural Industries and Information and Publicity. K Ramachandran, a former Minister, has been given forests department.

Years ago, KKSSR Ramachandran, S Reghupathy, S Muthusamy, S R Rajakannappan, Anita R Radhakrishnan, V Senthil Balaji and P K Sekarbabu had all been with the AIADMK. Barring Sekarbabu, others had also served as ministers in the AIADMK government. Ramachandran had been a Minister during the DMK rule (2006-11) as well.

In this article:Chief Minister of Tamil Nadu, DMK, MK Stalin