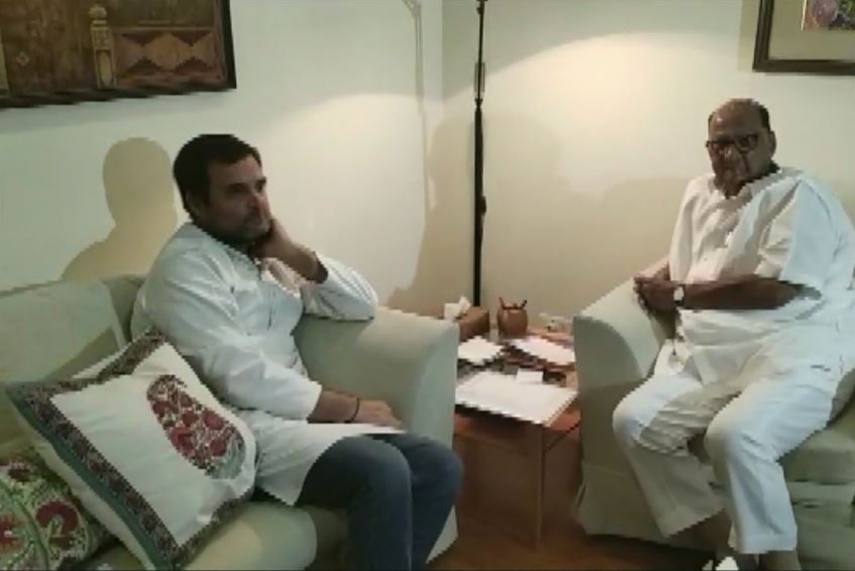 NEW DELHI: The Shiv Sena on Thursday said Congress leader Rahul Gandhi should join hands with NCP chief Sharad Pawar to align all opposition parties together to take on the ruling BJP at the Centre.

“Gandhi attacks the Centre and its policies regularly, but that is on Twitter,” an editorial in the Sena mouthpiece ‘Saamana’ said.

The Sena, which shares power with the NCP and Congress in Maharashtra, further claimed Prime Minister Narendra Modi’s body language has changed.

“He knows the situation in the country has gone out of his hands. Despite people’s anger, the BJP and the government have confidence that they face no threat because of the weak and disjointed opposition,” it said.

Pawar on Tuesday hosted a meeting of leaders of eight opposition parties, including the Trinamool Congress (TMC), the Samajwadi Party, the Aam Aadmi Party, the Rashtriya Lok Dal and the Left at his residence in Delhi, amid heightened speculation about the possibility of a third front against the BJP.

However, leaders who took part in that discussions asserted it was a “non-political” meeting of like-minded individuals by Rashtriya Manch that was floated by former finance minister and TMC vice-president Yashwant Sinha along with others.

The Sena editorial on Thursday said, “Rahul Gandhi should join hands with Pawar to align all opposition parties.”

The tea party of opposition leaders should have been organised by Gandhi, it opined.

“Sharad Pawar can bring all opposition parties together. But then, there is a question of leadership. If we expect the Congress to take the lead, the party is itself without a national president,” the Sena said.

There is an outfit called the UPA (United Progressive Alliance-led by Congress), but does the country have a strong and organised opposition? This question is still pending, it said.

“The tea party of Rashtriya Manch at Sharad Pawar’s Delhi home showed the exact status of the opposition,” it said in sarcastic remarks.

The two-and-a-half-hour meeting yielded nothing, despite being hyped by the media, the Marathi daily said.

All those who gathered at the meeting were the ones who “prioritise discussion and debate over political action”, it claimed.

The editorial further said there should be deliberation first on whether the opposition should come together only on one criteria – of opposing the BJP and Modi.

“The mountain of challenges faced by the country today is the legacy of the present government. What does the alternate leadership think about these problems?” the Sena sought to know.

A strong opposition is the need of parliamentary democracy. But, such an opposition is “non-existent” at the national level, it said, while noting that several regional parties have stood up against the BJP and defeated it in polls.