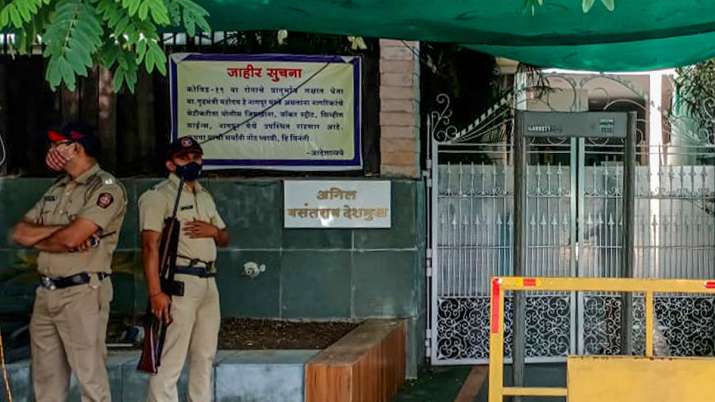 NAGPUR/ MUMBAI: For the second time in two months, former Maharashtra Home Minister Anil Deshmukh has come under the scanner, this time of the Enforcement Directorate (ED), which raided three locations, including his residences in Nagpur and Mumbai, and two others belonging to his two associates in connection with an alleged corruption case filed against him, officials said here on Friday.

The raids were carried out simultaneously at five locations as part of the probe into a money-laundering case filed against Deshmukh in May under the Prevention of Money Laundering Act (PMLA), even as the ruling Maha Vikas Aghadi allies slammed the Centre and BJP for the actions.

Soon after the ED launched the raids on Friday morning, the MVA allies — Shiv Sena-Nationalist Congress Party-Congress — slammed the Centre and the BJP for “misusing central probe agencies” to harass opposition parties.

In a blistering attack, NCP President Sharad Pawar told mediapersons that ever since the BJP came to power at the Centre, it is misusing its power and the probe agencies to harass the opposition leaders.

“This is being done only to harass Deshmukh. This is a new political pattern of the Centre. But they will get nothing, and we are not worried about such investigations,” Pawar said.

In a sharp attack, Congress spokesperson Sachin Sawant sought to know “what the ED is trying to search by raiding the residence of Anil Deshmukh” since both former Mumbai Police chief Param Bir Singh and sacked cop Sachin Vaze had “never said money was given”.

“If the ED feels that money was given, why no raids on Vaze and Singh who supposedly gave the money? This is a sad state of democracy. We must save democracy,” said Sawant.

He also alleged that all the national investigation agencies have surrendered their independence before the (Narendra) Modi government and are being used as political weapons against the opposition.

Sawant called upon the three ruling allies to “unitedly oppose this ploy to defame the MVA by torturing its leaders”.

NCP MP Supriya Sule said that while the entire state government is working round-the-clock to tackle the challenges of a possible ‘third wave’ of the Covid pandemic, the Centre is letting loose central agencies to pursue ‘vendetta politics’ against the opposition.

In Nagpur, a large group of NCP activists lodged strong protests and raised slogans against the BJP and the Centre for “blatantly misusing” central probe agencies like ED, CBI, NIA etc. to hound the opposition leaders.

Earlier on April 24, the Central Bureau of Investigation had raided around 10 locations of Deshmukh in multiple cities after he was booked. The 71-year-old leader was detained for several hours at his home during the searches on his premises then.

Following the allegations against him and the Bombay High Court directives, Deshmukh had quit as the Home Minister of Maharashtra on April 5.

After directions from the Bombay HC, the CBI had on April 6 registered a preliminary enquiry to probe the allegations of corruption and misuse of office levelled against Deshmukh by Param Bir Singh vide his ‘letter-bomb’ in March.

NEW DELHI: Describing the Covid situation in the country as grave, Leader of Congress in Lok Sabha Adhir Ranjan Chowdhury has written to President...

NEW DELHI: With the counting of votes underway, the Election Commission Sunday said it has taken a stern view of reports of congregation of...

LUCKNOW: Gorakhpur MLA Dr Radha Mohan Das Agrawal made the remarks after SII on Wednesday announced a price of Rs 600 per dose for...