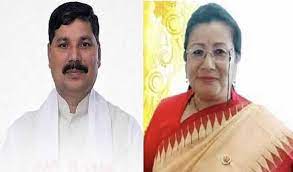 BJP national General Secretary and headquarters in-charge Arun Singh said in a statement that the appointment of Kalita and Devi made by party president Nadda came into immediate effect.

Kalita, a sitting MLA in the Assam Assembly, will replace Ranjeet Kumar Dass, who became a Minister in the newly-formed Himanta Biswa Sarma government in state.

Meanwhile, the BJP has also named its Manipur unit head, which will go to polls next year.