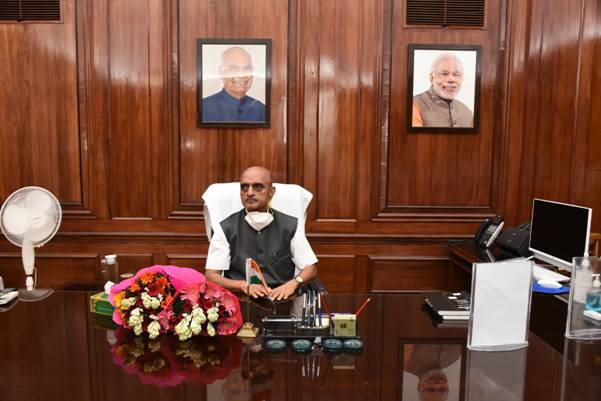 NEW DELHI: Anurag Thakur, has assumed his charge as Minister of Information and Broadcasting (I&B). Speaking with the media on the occasion, the Minister said Prime Minister Narendra Modi has made strenuous efforts to take the nation forward in the last seven years and that as Minister of I&B it will be his responsibility to take that mission forward.
Thakur said that he will make all efforts to deliver on the responsibilities placed on him by the Prime Minister and he looked forward to the cooperation of media in his efforts.
The Minister was welcomed in his chamber by Amit Khare, Secretary, Ministry of I&B. In an interaction with senior officials of various media units and Prasar Bharati, Thakur said that his endeavor will be to work with all the media heads as a team.
Thakur is a four time elected Member of the Indian Parliament (Lok Sabha) from Hamirpur, Himachal Pradesh. He has earlier held the charge of Minister of State for Finance and Corporate Affairs from 31st May 2019 till 7th July, 2021.
Within Parliament, he has served as Chairman of the Parliamentary Standing Committee on IT and Member of Public Accounts Committee. During the 16th Lok Sabha, he was appointed as the Chief Whip, Lok Sabha, becoming the youngest to assume the post.
Besides Thakur,Dr. Loganathan Murugan  has also assumed charge as Minister of State for Information and Broadcasting in the presence of Minister of I&B Thakur.Speaking with media on the occasion, Dr. Murugan thanked Prime Minister Modi for giving him the opportunity to serve as Minister of State for I&B.

He added that he shall perform his duties with sincerity. The Minister of State also thanked the Prime Minister for giving an adequate representation of the people of Tamil Nadu in his Cabinet.

In this article:Anurag Thakur, Dr. Loganathan Murugan, Minister of Information and Broadcasting