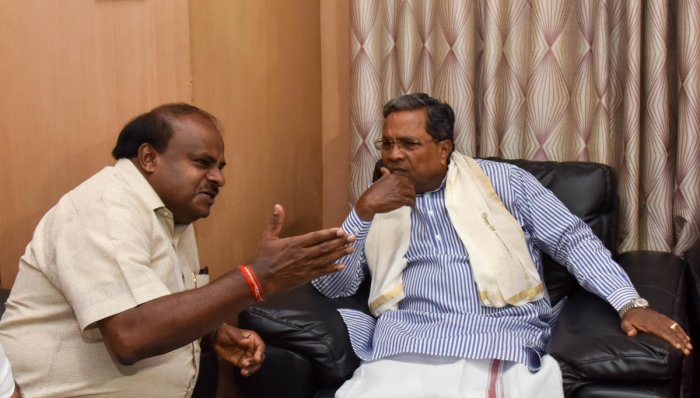 NEW DELHI: The Congress on Tuesday alleged that the JD(S)-Congress coalition government in Karnataka was toppled in 2019 by snooping on important leaders of the coalition, including then Chief Minister H.D. Kumaraswamy.
“The BJP had planned to topple the Karnataka government by horse-trading using the Pegasus spyware,” Congress leader K.C. Venugopal said in a press conference here on Tuesday, which was also addressed by other senior party functionaries.
Congress leader and former Karnataka Chief Minister Siddramiah said, “I don’t have a mobile phone, which means they tapped my personal secretary Venkatesh’s number. He has been with me for 27 years. They also tapped the number of Satish, who was Kumaraswamy’s personal assistant.”
According to a report published by The Wire, in the run up to the toppling of the opposition-run state government in Karnataka in July 2019, the phone numbers of then Deputy Chief Minister G. Parameshwara and the personal secretaries of then Chief Minister H.D. Kumaraswamy and former Chief Minister Siddaramaiah were selected as possible targets for surveillance.
Siddramiah further said, “The government of India headed by Narendra Modi played this dirty game to topple the opposition government in Karnataka. That is why they tapped the numbers of Satish, Venkatesh and Parameshwara, who was the Deputy Chief Minister in the coalition government. It was a crime committed by the government of India. The matter must be probed and raised in both the Houses of Parliament.”
On the other hand, Former Karnataka Chief Minister H.D. Kumaraswamy on Tuesday played down the Pegasus report alleging snooping on opposition leaders, journalists and other by the ruling BJP, even as the Congress alleged that the coalition government he headed was also targeted and eventually toppled.

“It is not happening just after Prime Minister Narendra Modi coming to power. Even Congress has done the same in the past,” Kumaraswamy said.

“I won’t bother much about mine or my secretary Satish’s phone being tapped to topple the coalition government,” he said.

Kumaraswamy said that instead of bothering about the issue, various political parties should focus on other significant matters. “We are in a difficult situation… concentration should be on the life of the common man,” he said.