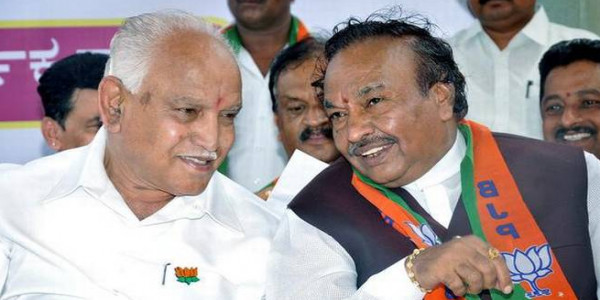 CHITRADURGA: Amid talk of a change of leadership in Karnataka, state Rural Development and Panchayat Raj Minister, K.S. Eshwarappa on Friday said the Bharatiya Janata Party (BJP) high command will not impose its decision concerning the Chief Minister (CM) nominee on the party.

Instead the party’s legislature meeting will elect the new Chief Minister as and when the leadership change takes place in the state, he added.

On the sidelines of a one-day workshop for Panchayat Development Officers (PDOs), Gram Panchayat Presidents and Vice Presidents of Chitradurga district here, Eshwarappa said the media is busy making wrong presumptions about the BJP’s functioning style.

“Ours is a democratic and disciplined party. Nothing is imposed from the top unlike in other parties. We follow the procedures. BJP central leaders will announce a CM nominee only after consulting each and every MLA and also the leaders concerned,” he said responding to a query.

Reiterating Chief Minister B.S. Yediyurappa’s statement, Eshwarappa said Yediyurappa has himself clarified that he would not be suggesting any replacements for the CM’s chair as this matter has to be decided collectively by the party and not by any individual.

“Whenever leadership is changed in Karnataka this time, it will be a collective decision and not any individual’s decision,” he added.

Responding to a query, Eshwarappa said the Lingayat seers must know that the demand for change in leadership was raised by none other than leaders from their own community.

“Those (seers) who are talking in support of Yediyurappa now should have acted when their own community leaders were talking ill about him, raising the change in leadership row. These seers should have stopped them, now it really does not matter when Yediyurappa himself has said he would abide by the party’s central leaders’ orders,” he added.