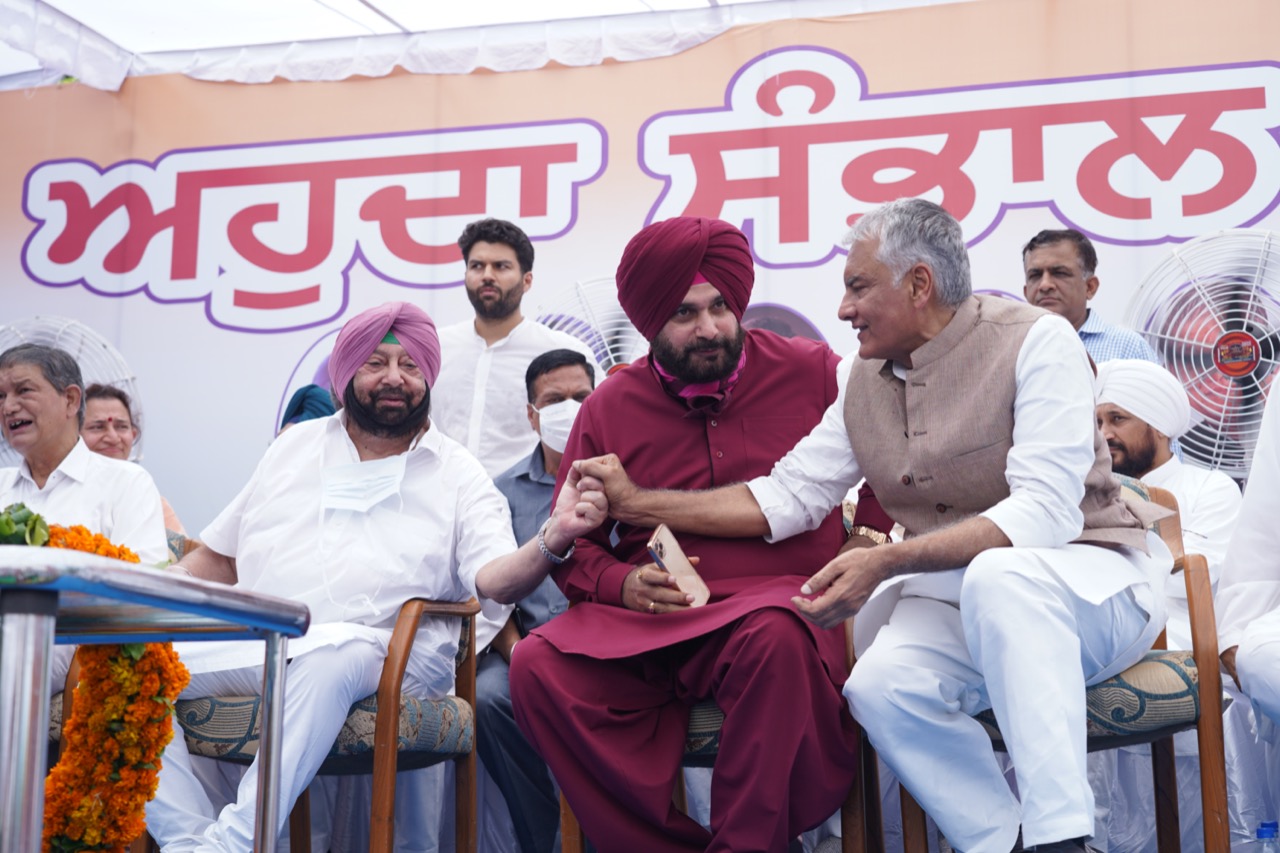 CHANDIGARH: Navjot Singh Sidhu on Friday took over as the new chief of the Punjab Congress at an event held here, which was attended by Chief Minister Amarinder Singh, with whom he was at loggerheads in the recent past.

The new working presidents of the Punjab Congress — Sangat Singh Gilzian, Sukhwinder Singh Danny, Pawan Goel and Kuljit Singh Nagra — also assumed charge at the event at the party’s state headquarters here in the presence of a huge number of Congress workers and supporters.

In his address, Sidhu said, “All Congress workers in Punjab have become the party’s state unit chief today. There is no difference between a leader and a worker.”

He said the workers are the soul of the party, which derives power from them.

The cricketer-turned-politician, who takes over the state Congress chief’s post from Sunil Jakhar, said he will have love for juniors and respect for elders.

“Punjab will win, Punjabis will win,” he said.

Ahead of taking charge of the state Congress, Sidhu met Singh at the Punjab Bhawan here.

The chief minister and the Amritsar (East) MLA were seen sitting next to each other at the Congress headquarters ahead of the latter taking charge of the party’s state unit.

According to a Congress leader, the meeting between Sidhu and Singh earlier at the Punjab Bhawan was “cordial”.

Speaking to reporters outside the Punjab Bhawan, Congress MLA Pargat Singh said Sidhu met the chief minister over tea in the presence of Rawat.

The two leaders sat next to each other and the meeting between them was cordial, he added.

This was the first time in nearly four months that Sidhu and Singh met each other.

The chief minister’s media adviser tweeted pictures of the two leaders having a chat.

Singh had invited Congress leaders for tea at the Punjab Bhawan.

Sidhu came from Patiala and went to the Punjab Bhawan shortly before Singh’s arrival.

Ministers, Congress MLAs and other senior party leaders were also present at the Punjab Bhawan.

Nagra and Gilzian, two of the four newly-appointed working presidents of the state Congress, had on Thursday extended a formal invitation to the chief minister at his farmhouse in Mohali’s Siswan for the installation ceremony. The invitation letter was signed by over 55 legislators.

In an apparent bid to bury the differences with the chief minister, Sidhu had separately requested Singh to come for the installation ceremony and said he had “no personal agenda”.

Sidhu and Singh were at loggerheads for some time, with the Amritsar (East) MLA recently attacking the chief minister over desecration cases.

Singh had earlier opposed Sidhu’s appointment as the state Congress chief and said he would not meet him until the cricketer-turned-politician apologised for his “derogatory” tweets against him.

On Thursday, after the Congress leaders met the chief minister, the latter’s media adviser had tweeted, “Punjab CM @capt_amarinder has invited all @INCPunjab MLAs, MPs and senior party functionaries at Punjab Bhawan for tea at 10 am on Friday. They will all then go to Punjab Congress Bhawan together from there for the installation of the new PPCC team.”

Congress president Sonia Gandhi appointed Sidhu as the new chief of the party’s Punjab unit on Sunday, notwithstanding the strong opposition from Singh.

She also appointed four working presidents in the Punjab Congress to assist Sidhu in the run-up to the state Assembly polls next year.

On Wednesday, several legislators backing Sidhu had said there was no need for him to tender an apology to the chief minister.

Tensions between Singh and Sidhu flared up in April after the Punjab and Haryana High Court quashed a probe report on the 2015 Kotkapura police firing incident.

Sidhu attacked the chief minister through his tweets over the alleged delay in justice in the 2015 sacrilege and subsequent police-firing incidents.

The Amritsar legislator had resigned as a state minister in 2019 after he was divested of his local bodies portfolio.

Sidhu had switched sides from the Bharatiya Janata Party (BJP) to the Congress before the 2017 state Assembly polls.