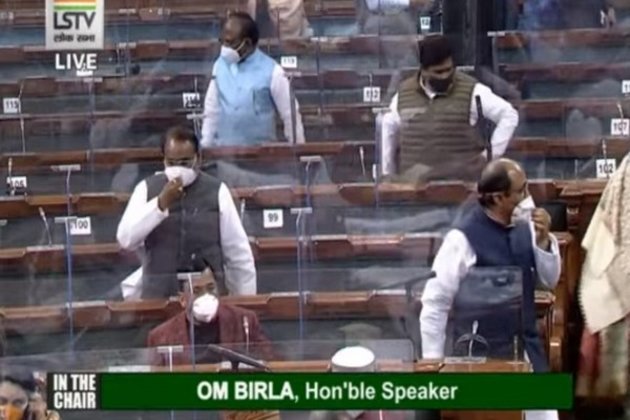 NEW DELHI: Lok Sabha on Tuesday witnessed a series of brief adjournments amid uproar created by opposition members over various issues, including the Pegasus spying controversy and the three contentious agri laws.

While no legislative business could be transacted, the House for the first time in the Monsoon session took up “matters of urgent public importance” wherein MPs raise issues relating to their respective constituencies.

Soon after the House assembled for the day, Speaker Om Birla repeatedly urged the protesting members to go back to their seats.

Agriculture Minister Narendra Singh Tomar took a swipe at the protesting opposition members and said if they are concerned about farmers, they should allow the proceedings of the House to continue.

He made the remarks while replying to a supplementary query related to an insurance scheme for farmers during the Question Hour as the opposition members continued with their sloganeering on various issues, including the Pegasus spying controversy and the agriculture laws against which a section of farmers has been protesting on Delhi’s borders for eight months.

“There are around 15 questions related to farmers. If the opposition members are really concerned about farmers, they should listen to what the government has to say,” Tomar said.

“Disruptions are lowering the decorum of the House,” he said.

After being adjourned nine times, the lower house reassembled at 4.30 PM and Rajendra Agrawal, who was in the Chair, once again took up one matter of urgent public importance.

However, the opposition members again trooped into the Well shouting slogans and carrying banners.

The members of the Congress, CPI, CPI(M) and the TMC were protesting over the Pegasus snooping row, while the BSP, SP and the Shiromani Akali Dal were raising slogans against the Centre’s three farm laws.

Agrawal urged the protesting members to go back to their respective seats.

“We are requesting you to please cooperate and participate in the proceedings,” he said.

With opposition members not willing to relent, Agrawal adjourned the House for the day.

The opposition’s protests started soon after the proceedings began at 11 AM.

Minister of State for Parliamentary Affairs Arjun Ram Meghwal said by disrupting the proceedings, the opposition is not allowing the ministers to do their duty of replying to questions.

As the protests continued, the House was adjourned for the first time till 11.45 AM.

When the House met again, the protests continued, leading to another adjournment till 12 noon.

As Lok Sabha reassembled at 12 noon, Agrawal, who was chairing the proceedings, asked the protesting members to discuss their issues and said the government is ready to answer their questions.

As the protests continued, Agrawal adjourned the House till 12.30 PM and later till 2 PM.

Subsequently, Bhartruhari Mahtab, who was in the Chair, had to repeatedly adjourn the House due to continuing protests.