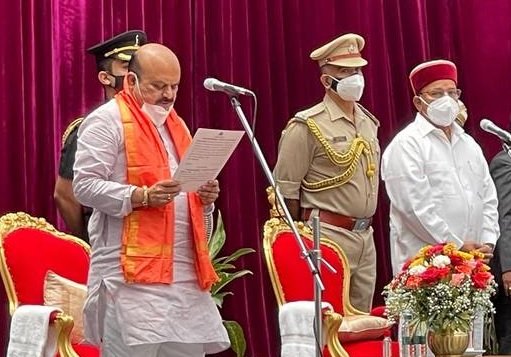 BENGALURU: Basavaraj Bommai on Wednesday took oath as the new Chief Minister of Karnataka. The 61-year-old leader was administered the oath of office and secrecy by Governor Thaawarchand Gehlot at the Raj Bhavan here.

Bommai, a Lingayat leader from North Karnataka is a close confidante of Yediyurappa and, according to party sources, there is clear stamp of the veteran BJP leader in this succession plan.

Son of former Chief Minister, late S R Bommai, he was Minister for Home Affairs, Law, Parliamentary Affairs and Legislature in Yediyurappa’s council of ministers which was dissolved on Monday.

Bommai is a three time MLA from Shiggaon constituency in Haveri district and has been MLC twice.

Ahead of the swearing-in, Bommai met Yediyurappa, also leaders from the centre- Pradhan, Reddy and Singh.

Ending months of speculation over his exit, Yediyurappa on Monday stepped down as the Chief Minister, coinciding with his government completing two years in office.

In this article:Basavaraj Bommai, BJP, Chief Minister of Karnataka