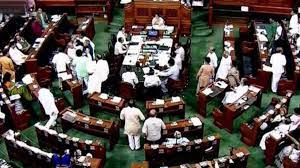 NEW DELHI: Rocked by protests from opposition parties on Pegasus snooping and other issues since the start of the Monsoon session, Parliament has only functioned for 18 hours out of the scheduled time of 107 hours, resulting in a loss of more than Rs 133 crore of taxpayers’ money, government sources said on Saturday.

Sources said so far 89 hours have been wasted in the ongoing session which started on July 19 and is scheduled to conclude on August 13.

“Lok Sabha has only been allowed to function for about seven hours out of possible 54 hours.

The disruptions have led to a loss of more than Rs 133 crore to the exchequer, they said.

Opposition parties have been disrupting proceedings in both Lok Sabha and Rajya Sabha demanding discussion on Pegasus snooping, farm laws and other issues. Amid the din, five bills have been passed in Lok Sabha, besides Appropriation bills. Rajya Sabha has also passed almost a similar number of bills.

The opposition and the government have blamed each other for the current deadlock.