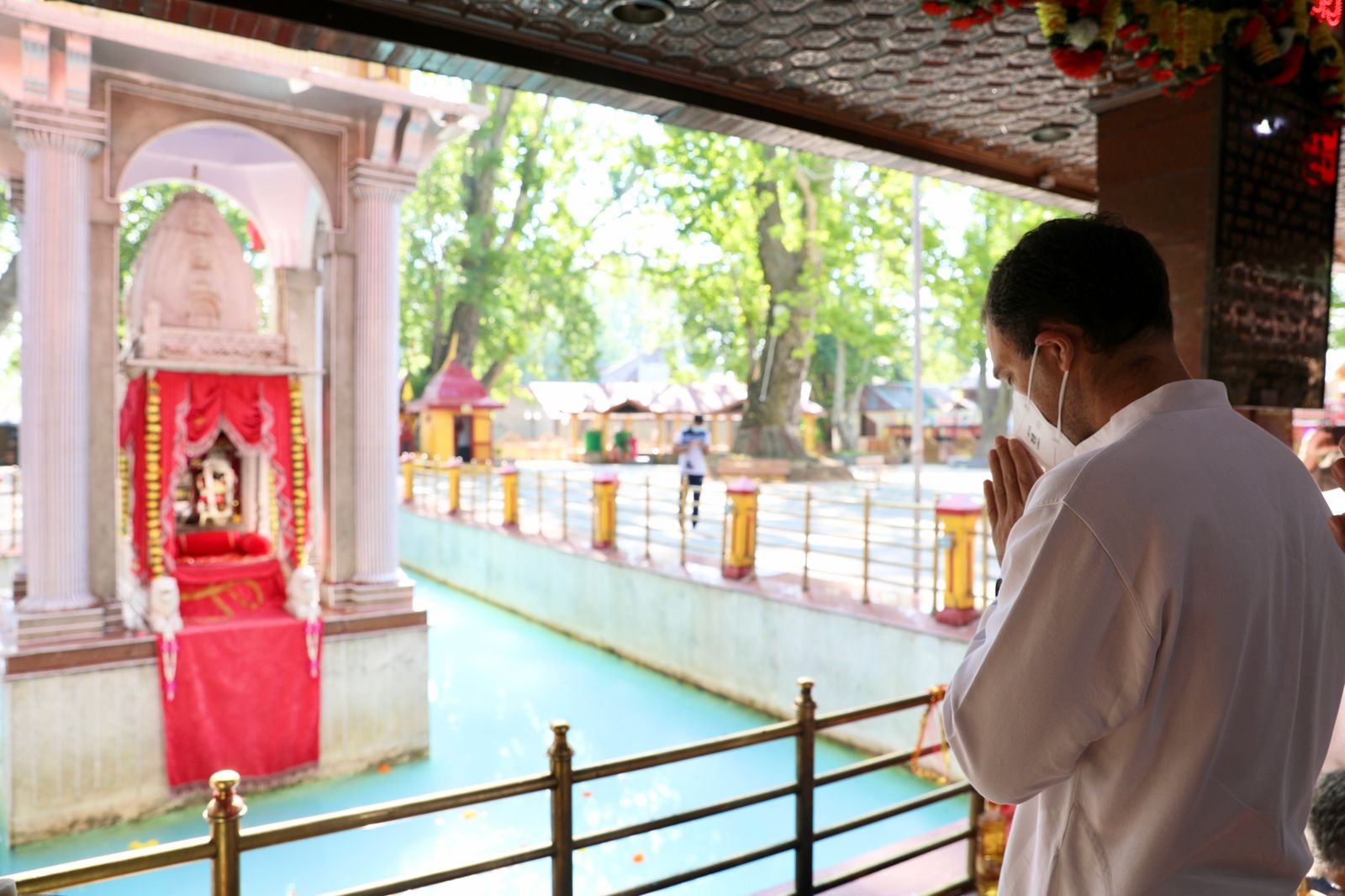 SRINAGAR: Congress leader Rahul Gandhi on Tuesday said he feels like “coming home” when he visits the Kashmir Valley as he pitched for restoration of Jammu and Kashmir’s statehood before holding assembly elections.

“I can tell you that I understand you, my family must have drank water from the river Jhelum. Kashmiriyat, the culture and thought process must be in me too. When I come here, I feel like I am coming home,” he said, while referring to his family ties to Kashmir and added that he had come with a message of love and respect.

Gandhi, a former Congress president, said that there was an urgent need for restoration of statehood before holding the assembly elections. “Statehood should be restored and then the democratic process should be started, that is election (to state assembly),” he said.

Before the event, Gandhi offered prayers at the Mata Kheer Bhawani shrine, the revered shrine of Kashmiri Pandits, in Ganderbal in central Kashmir.

Reacting to the suggestion of senior party leader Ghulam Nabi Azad that a bill for restoration of statehood to J-K be brought during the current session of Parliament, Gandhi said there were several issues that he wanted to raise in Parliament, but the opposition was not allowed to speak there.

He said he was told by his colleagues that J-K was not a big state with many Lok Sabha seats, but stressed upon the importance of the place.

“It is not a state with many Lok Sabh seats…It is not even a state now. But the strength of J-K is the way you live. India and its foundation has Kashmiriyat. This feeling is in me too. What you can get me to do with love and affection, you will never achieve it through force and hatred. That is Kashmiriyat. If you own J-K with love and respect, you will get done whatever you want to,” he said.

The former Congress president said when his party was in power, it tried to unite and join the country, but the BJP believes in divisive ideology.

“When we were in power, we started lots of programmes like Panchayat elections, Udaan, etc. We also brought in industrialists to invest in J-K. We were trying to unite and join. They (BJP) have attacked it,” he added.

He said the new office building of the party’s J-K unit is a new beginning and added that the workers were the party’s army.

“I tried to come here earlier also, before Covid outbreak, but I was not allowed beyond the airport,” he said, referring to his visit immediately after the Centre’s August 2019 decisions to abrogate Jammu and Kashmir’s special status and bifurcate in into union territories.

“I will visit Jammu and Ladakh as well,” he added.

Addressing the gathering earlier, Azad urged Gandhi to raise the issue of J-K in Parliament so that a bill that restores the statehood and protects land and job rights of locals is passed in Parliament within the remaining three days of the ongoing session.

“I request Rahul ji to raise this issue, bring a bill in Parliament in the ongoing session that will restore the statehood and protect the land and job rights. There is not much to debate, it will take just five minutes,” Azad said.

Recalling the sequence of events after August 5, 2019, Azad said it was the biggest joke played on the people of J-K and democratic India.

“It was the biggest joke in democratic India that was played on J-K. The statehood was snatched and two Union territories were created. It has never happened in India, perhaps nowhere in the world. Even in Parliament’s history, it has never happened,” he said.

The former leader of opposition in Rajya Sabha said he and his colleagues tried to visit J-K in the aftermath of the Centre’s August 5, 2019 decisions, but were stopped.

I had to approach the Supreme Court which gave limited access. I could only visit Baramulla, Anantnag and Jammu,” he added.

Azad expressed hope that the assurances given by the prime minister at an all-party meeting in June this year will be fulfilled.

“At the all-party meeting, the PM gave assurances. We hope that he will fulfil those assurances including the five points raised by the Congress. They should restore statehood and then hold elections,” he said.

Azad said that J-K cannot be a state like Delhi where every order has to be approved by the Lieutenant Governor.

“J-K is a border state and the L-G cannot govern it. We don’t want a Delhi like state where L-G has to approve every order,” he said.

On the protection of land rights, Azad said it was not Article 370 that gave this provision to J-K.

“It was not a new law. It was passed by Maharaja Hari Singh in 1927. North East has special provisions on land rights while the Himachal Pradesh assembly has also passed a law. Why snatch it from JK?” he asked.

The former J-K chief minister said industrial activity in the Jammu region had suffered as 65 per cent of the 13,000 industrial units had shut down in the past two-and-a-half years.

“Most of these units were manufacturing products which had a market in Kashmir,” he said, referring to the economic downturn in the UT.

In this article:Congress, Kashmir, Rahul Gandhi