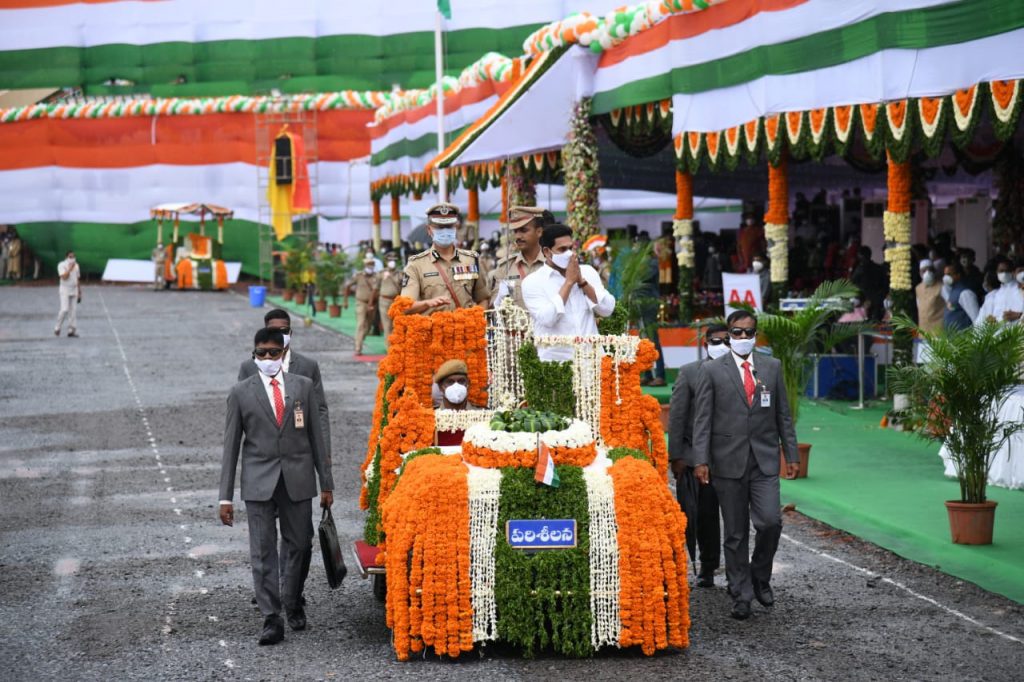 AMARAVATI: Andhra Pradesh Chief Minister Y S Jagan Mohan Reddy unfurled the national flag and took the salute on Independence Day at the state function at the IGMC Stadium in Vijayawada on Sunday.

While dwelling upon his pet freebie schemes, the Chief Minister in his address skipped any mention of the “three capitals” for the state his favourite theme or the promised job calendar for filling up vacant government posts.

He also skirted issues related to the government employees and their long-pending demands like implementation of new pay scales and release of dearness allowance arrears.

Though sub judice, the Chief Minister reiterated his government’s resolve to enforce English medium of education by bringing all schools in the state under the CBSE.

“This is your government. With the power you have given, I am here only as your servant. I am trying to correct the systemic lapses that we still see even after 74 years (of Independence),” Reddy said.

He observed that Independence Day was an occasion to correct the wrongs, set new targets and lay new paths.

“When we attained Independence 74 years ago, what we desired for was the freedom to govern ourselves. Now, people are wishing that the rights, safeguards and freedom granted by our Constitution are scrupulously implemented,” the Chief Minister remarked.

People were wishing for a situation, climate and opportunities wherein the equitable rights enshrined in the Constitution under Articles 12 to 35 were implemented, he added.

“The definition of rights, human rights and independence keeps expanding and changing. In the last 26 months of my governance, we have striven to create an atmosphere for implementing all rights everyone is entitled to,” the Chief Minister claimed.

The Chief Minister also claimed that 6.03 lakh jobs were created in the last 26 months.

He, however, did not make any mention about the promised annual recruitment calendar or the demand that the 2.3 lakh vacant posts in the government be filled in accordance with his election-eve promise.

On issues related to government staff, the Chief Minister claimed they granted an interim relief of 27 per cent soon after assuming power, “which is unprecedented.”

“In the last 16 months, the state’s revenue has not been on expected lines because of Covid-19. But the expenditure has gone against our expectations. I know some more things need to be done for the employees. In the coming days, we will take some decisions to do justice to the staff,” the Chief Minister summed up.