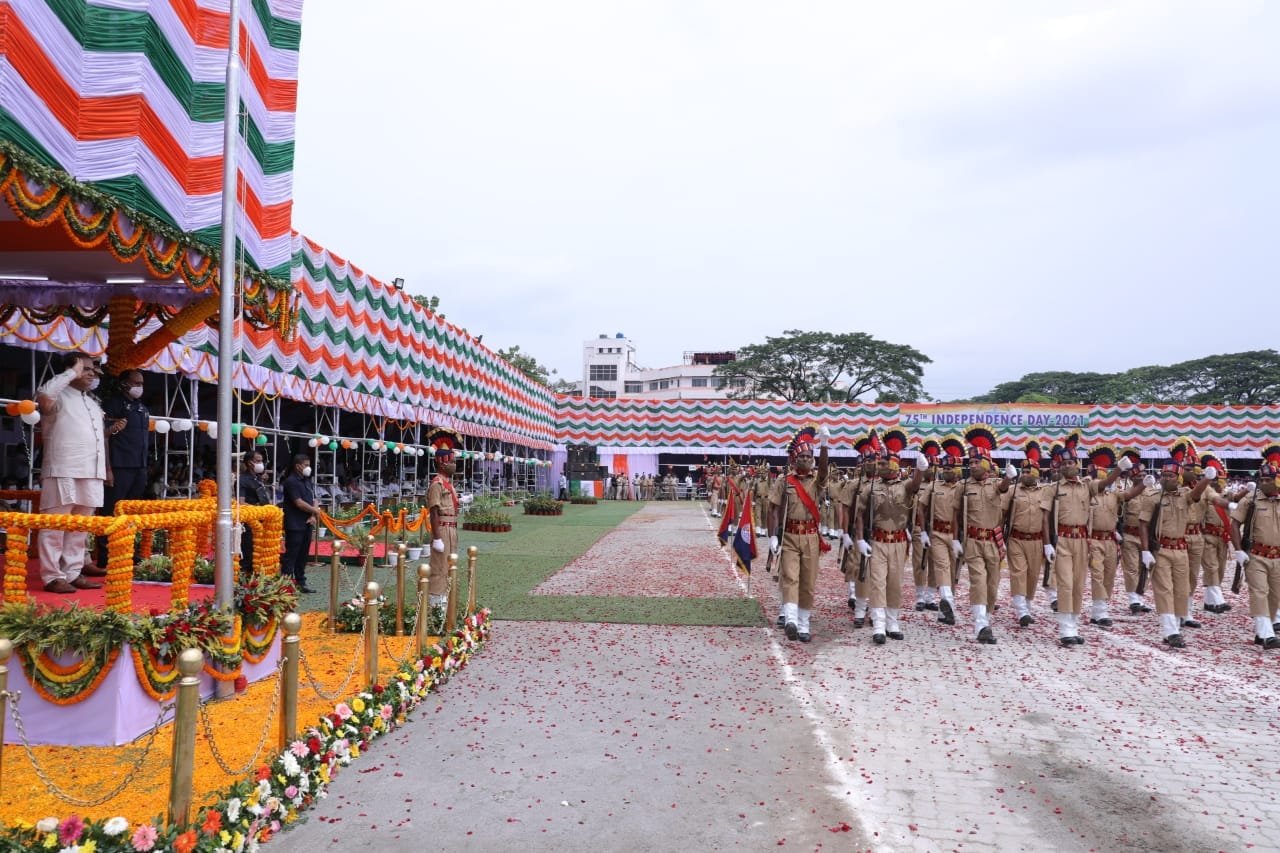 Sarma also expressed his gratitude to COVID warriors for their unrelenting fight against the pandemic, and reaffirmed his government’s commitment to the war against drugs and human trafficking.

He made 10 ‘requests’ to the people of Assam, including taking care of aging parents and marrying off daughters not before the age of 21, to mark the 75th Independence Day.

Speaking at the state function organised on the occasion, the chief minister said that Assam is celebrating Independence Day without any bandh called by militant groups, including ULFA, for the first time in decades.

“On behalf of the people of Assam, I appeal to Paresh Barua to come forward for dialogue. Let no youth of our state be killed anymore,” he sThe ULFA (I), which had been calling for Assam Bandh on Independence Day and Republic Day for several decades, refrained from the practice for the first time for Independence Day this year.

The outfit has also declared a unilateral ceasefire since May this year in view of the pandemic situation. The chief minister had earlier urged Barua to come for peace talks after assuming power in May this year.

Sarma thanked all COVID warriors, including doctors, nurses, laboratory technicians and ambulance drivers, for working tirelessly in the pandemic. Noting that COVID-19 vaccination for all eligible people was progressing well in the state, he said that 1.5 crore doses will be administered in the next one week.

He congratulated boxer Lovlina Borgohain for her Olympic bronze medal and said that her success is an inspiration for all.

Sarma paid tributes to the six Assam Police personnel killed in violence along the inter-state border with Mizoram on July 26, and conferred them the ‘Chief Minister’s Special Service Medal in a Crisis Situation’ posthumously.

He said that the Assam government is committed to resolving the border disputes without compromising with the state’s constitutional boundary. “I urge the northeastern states to resolve the disputes through talks to keep the ‘soul’ of our region alive,” he said.

The chief minister said that the Assam Cattle Preservation Bill, 2021, which was passed by the assembly on Friday, shows the state government’s resolve to protect the cultural ethos of the state.

He said that the government is committed to eradicating poverty through population control and will carry on its war against drugs, human trafficking and other social menaces.

Sarma said his government will fulfil its pre-poll promises including providing one lakh government jobs and waiving loans taken by women from micro-finance institutions. “We want to do away with red-tapism in bureaucracy,” he said.

The chief minister announced that freedom fighters’ pension issued by the state government will be increased to Rs 36,000 at par with the central remuneration and state honours will be accorded to all these former revolutionaries during their last rites.

He made 10 ‘requests’ to the people of the state and urged them to comply with these to build a better Assam.

Sarma urged people to observe birth and death anniversaries of Vaishanvite preachers Srimanta Sankardeva and Madhabdeva as opportunities to emulate their teachings. He called on people to make it a tradition to begin all programmes with a rendition of the state song and conclude those with the National Anthem.

Urging people to take care of their aging parents, the chief minister said that his government will sanction seven days leave per year to its employees to visit their parents and requested other employers and businessmen to follow suit.

To improve the work culture, he requested government employees to spend an extra hour at the office and leave no work pending. He appealed to people to stop using single-use plastics and do at least one ‘good deed’ this year like giving free tuition to needy students or organising health camps.

Sarma urged people not to marry off their daughters till they attain the age of 21, and cooperate with police to fight drugs and human trafficking.