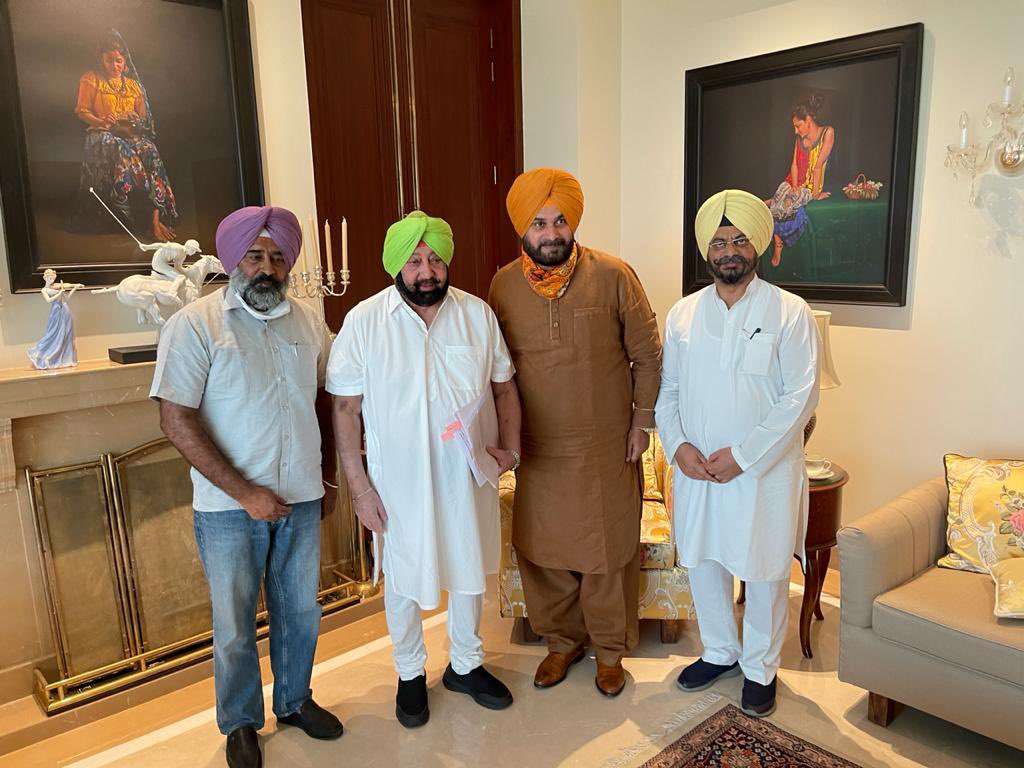 The development is seen as a sign of thaw between Singh and Sidhu, amid the ongoing tussle between the two of them.

In another development, the chief minister has deputed his ministers to sit at Congress Bhawan here for interacting with the party cadre and public.

Congress president Sonia Gandhi had earlier advised that the Punjab government and the state unit of the party must work together.

To be headed by the chief minister, the Group will have Local Government Minister Brahm Mohindra, Finance Minister Manpreet Singh Badal and Social Security Minister Aruna Chaudhary as members along with Sidhu.

The decision was taken on Friday when Sidhu, along with Nagra and Pargat, called on the chief minister to discuss Punjab related issues and steps to strengthen party-government coordination, a statement here said.

The Group will hold weekly meetings in consultation with other ministers and experts as may be required. It will discuss and review the progress of various state government initiatives already under implementation, and will also suggest measures to expedite the same, it said.

In another decision, which came after Sidhu wrote a letter to the chief minister, Singh has also assigned his cabinet colleagues the task of being available in Punjab Congress Bhawan, the party’s state headquarter here, every day, by rotation, for meetings with MLAs and other party functionaries to discuss issues relating to their constituencies or areas and address any grievances.

One minister each will be available at the Congress Bhawan from Monday for three hours between 11 am and 2 pm, the roster for which has been put up by Sidhu on his Twitter handle, and in any case the minister deputed for a particular day is unable to make it for some reason, he or she shall arrange for a substitute in consultation with any other minister.

The arrangement will be in place five days in a week, from Monday to Friday, said the chief minister, adding that this will help in better coordination between his government and party functionaries in the run-up to the 2022 Assembly elections.

Sidhu, who released a photograph with the CM on his Twitter handle, said in a tweet, Highly positive Co-ordination meeting on proposal for roaster (sic) of Ministers to sit at Punjab Congress Bhawan !! .

In his letter to chief minister, Sidhu said Punjab Congress workers are the backbone of the party, whose persistence, hard work and dedication led us to a sweeping victory in 2017 elections.

Ever since the esteemed Congress high command has given me the pivotal responsibility as President, Punjab Pradesh Congress Committee, I have been interacting with hundreds and thousands of our party colleagues on a daily basis and listening to their concerns.

“I, along with PCC working presidents and senior state Congress leadership are of the opinion that there are issues of dire importance to the people of Punjab, which are brought to the notice of PCC on a daily basis, Sidhu wrote.

Ministers spending quality hours in PCC office for five days a week to hear concerns of Congress workers, Unions and people of Punjab, and taking immediate action will be a great way to discharge their duty, he said in the letter.

Creating a roster for efficient management, giving turns to each minister to sit and hear issues related to different departments and areas of Punjab can be a crucial step towards hearing and resolving the issue of the people of Punjab, he said.