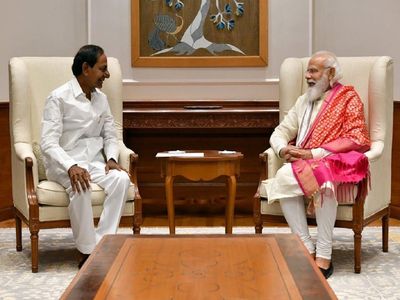 Rao, who met Modi in the national capital on Friday, also sought 100 per cent funding for constructing road networks in the naxal affected areas keeping aside 60:40 ratio (state 60 per cent and Centre 40 per cent) as the internal security issues are of national importance.

“The allocation will help the posting of IPS officers as Commissioners/ Superintendents of Police/ Zonal DIGsP/Multi Zonal IGsP in various territorial units. At present these territorial units have no sanctioned Cadre posts,” Rao said in one of the memoranda submitted to the PM.

KCR, who is camping in Delhi, performed Bhoomi Puja (groundbreaking) for TRS party office on Thursday. He left for the national capital from here on September 1.

The KCR-led government has created 33 districts from the earlier 10.

Rao also requested the Centre to sanction 21 Jawahar Navodaya Vidyalayas in view of the increased number of districts.

In order to give a fillip to the textile sector in Telangana, the Chief Minister requested Modi to give Rs 1,000 crore as one time grant in aid for the Warangal Textile Park.

He requested the Prime Minister to expedite the work for setting up a Tribal University in the State as promised in the Andhra Pradesh State Reorganisation Act, 2014.

The state government has already identified 200 acres of land near Warangal for the purpose, he further said.