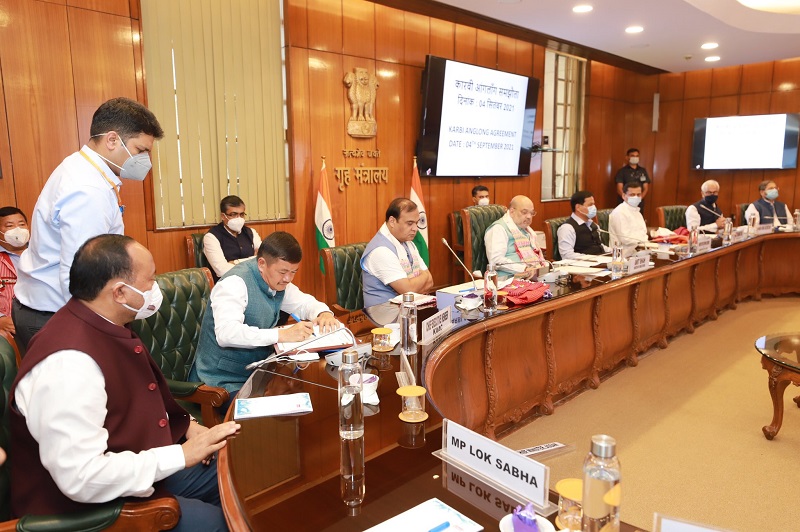 NEW DELHI: A tripartite agreement among five insurgent groups of Assam, the Centre and the state government was signed on Saturday to end years of violence in the Karbi Anglong region.

Union Home Minister Amit Shah, who was present on the occasion, said the accord will bring lasting peace and all round development in Karbi Anglong.

About 1,000 militants belonging to these groups have surrendered along with their arms and have joined the mainstream.

Shah said the signing of the Karbi-Anglong Agreement is another milestone in Prime Minister Narendra Modi’s vision of “insurgency-free prosperous Northeast”.

“Over 1000 armed cadres have abjured violence and joined the mainstream of society, which reflects their trust in Modi ji’s leadership,” he said.

Shah said that a Rs 1,000 crore development package will be given to Karbi Anglong.

“I want to assure everyone that we will implement this accord in a time-bound manner,” he said.

The home minister said the central and state governments are committed to all round development of Karbi Anglong and there will be peace in the region.

“We not only sign peace accords but implement them within our time too,” he said, citing the example of similar peace pacts earlier signed with other insurgent groups of the Northeast — the NDFB, NLFT and Bru groups.

Shah said ever since the Modi government came to power, its focus in the Northeast is not only to ensure peace but also overall development.

“We have ensured that there is all round peace, no violence, no blast, no firing in the Northeast,” he said.

Shah said it is the policy of the Modi government that those who give up arms are brought into mainstream and we talk to them even more politely and give them more than they ask for.

He said due to this policy only, the country is getting rid of old problems one by one that the Modi government had inherited.

The accord is significant as Karbi Anglong, which is the territory of ethnic Karbi tribals, has seen years of violence, killings and abduction in the rebels’ fight for a separate homeland.

Union minister and former Assam chief minister Sarbananda Sonowal, who was present on the occasion, appreciated the efforts of the prime minister and the home minister in bringing peace in Assam and the Northeast.

Assam Chief Minister Himanta Biswa Sarma said it was a historic day as the militants of these five insurgent groups will now join mainstream and work for the development of Karbi Anglong.

The peace agreement will ensure greater devolution of autonomy to the Karbi Anglong Autonomous Council (KACC), protection of identity, language, culture of Karbi people and focussed development of the council area, without affecting the territorial and administrative integrity of Assam.

??????? The Karbi armed groups have agreed to abjure violence and join the peaceful democratic process as established by law of the land.

The agreement also provides for rehabilitation of cadres of the armed groups.

The government of Assam shall set up a Karbi Welfare Council for focussed development of Karbi people living outside KAAC area.

The consolidated fund of the state will be augmented to supplement the resources of KAAC.

Overall, the present settlement proposes to give more legislative, executive, administrative and financial powers to KAAC.