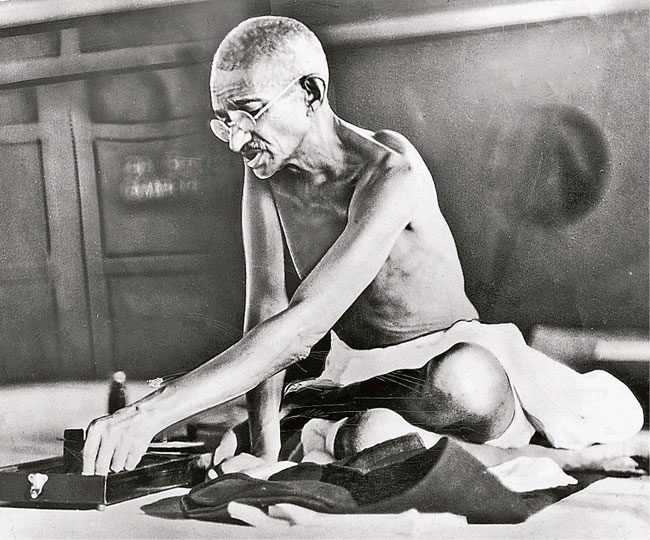 Gandhiji was the one and only acceptable person for all Indians a century ago,he still maintains that position.

Time has changed, his  philosophy has been crushed by vested interest politicians yesterday and today, too,but he remains the same.All in this country have forgotten him and made him a photograph.

Every year, on 2nd October, Sanghis make it a point to project Nathuram Godse as number one trend. Shamelessly, BJP supporters and Sanghis hail the killer of Mahatma Gandhi as their hero.

We all know, they killed Gandhi as they hate Gandhi. But the most unfortunate thing is that they use the name and brand of Gandhi abroad to promote themselves as done recently in the US.The killers and terrorists are now sitting on the top of administration of the country as rulers in the guise of democracy.

All the countries in the power corridor have forgotten Gandhi and have made him a photograph for Azadi ki Amrit Mahotsav ! A country which celebrates the killing of Gandhi on Gandhi Jayanti, certainly deserves pity. Cry my beloved country , cry forever !

Let me tell you a story.

Every day early morning a little girl would come to the temple and stand before the idol,close her eyes and with folded hands,murmursomething for a couple of minutes.

The temple Poojari was observing her and was curious about what she was doing.He thought,she is too small to know the deeper meanings of religion,she would hardly know any prayers.But then what was she doing every morning in the temple?

Fifteen days passed and Poojari now couldn’t resist but to find out more about her behaviour.

One morning,Poojari reached there before the girl and was waiting for her to complete her ritual.

He placed his hand on her head and said,“My child, I have seen since the last fifteen days that you come here regularly. What do you do?”

“Do you know any prayers?”asked the Poojari with some suspicion in his voice.

” Then what are you doing closing your eyes, every day? He smiled.

Very innocently the girl said :*“I do not know any prayer, but I know “a,b,c,d….up to z.” I recite it five times’ and tell God that,”I don’t know your prayer, but it cannot be outside of these alphabets.” Please arrange the alphabets as you wish and that is my prayer.”

And she ran, jumping on her way out. The Poojari stood there dumbstruck,staring at her for a long time as she disappeared running in the wilderness.

Gandhiji’s Life is a story of our quest for democracy.Gandhi is a belief like the belief of that innocent girl.It goes for generations to generations. My father was with Gandhi, now I am, tomorrow my children will be.

All the saints were good story tellers but all the good storytellers are not saints.Congress has been treated like a milch cow which has now turned old. All wanted to milk it till the last drop and criminal politicians keep on doing storytelling on Gandhiji’s India and democracy.

Now, it’s the turn of some vultures.But,Bapu Never Dies nor democracy.Happy Gandhi and Shastri Jayanti to All.