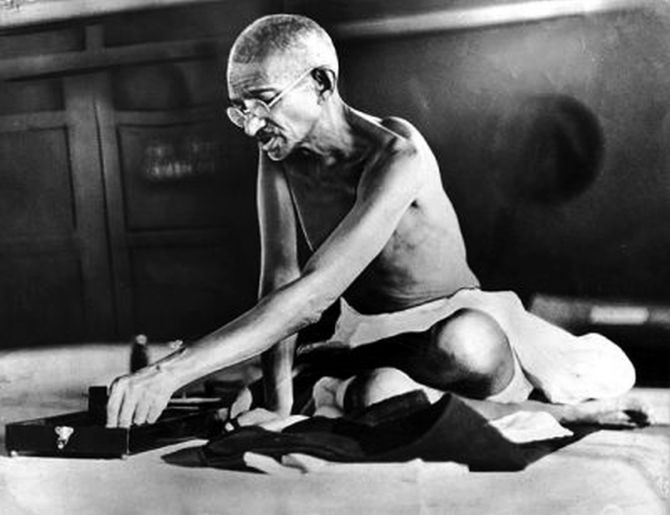 It was a coincidence that while my article on Gandhiji appeared today, I was performing the death anniversary rituals of my Gandhian Father who was in the freedom struggle with Gandhiji and met him personally in Odisha.

Ideas never die, people may. I had the privilege of listening to the observation of Albert Einstein from my father on Gandhiji a number of times. Today too I re-energize my mind with an article of a young friend:

‘Albert Einstein once described him as – “It’s hard to believe such a man in flesh and blood ever walked on the surface of earth”. The world famous scientist wasn’t far from the truth, as the man he was referring to rightly earned his accolades. We are talking about none other than our BAPU (Father of the Nation), Mohandas Karamchand Gandhi, popularly known as MAHATMA (the famous soul) Gandhi.

Newton’s 3rd Law says every action has an equal and opposite reaction. Same is applicable to human emotions. Every violent action would naturally follow with an equal or more violent reaction, often leading to a continuous, never ending cycle of revenge. But Mahatma Gandhi decided to fight violence in an exactly opposite manner, something different and out of box called “Non-violence”.

It was another matter that when Gandhi came back from South Africa violence was not an option as India was not in a position to take the might of the British by force. Unlike many who believe that the British shat in their pants and fled away on the sight of Subash Chandra Bose, militarily Indians never posed any serious challenges to British rule. (For those now ridiculing Gandhi for his nonviolent method of resistance should ask themselves how many Battalions were raised by their idols RSS and Hindu Mahasabha – both were conspicuous by their presence prior to independence).

Born in Gujarat to an upper middle class family, educated in England, Mohandas Gandhi first experimented his peaceful protests against the brutally racist Apartheid regime in South Africa. He subsequently applied the same against the British rule in India.

Gandhiji (as he was popularly addressed as) experimented with different vices and virtues early in his life, prompting him to write “My Experiment with Truth”, where he frankly admitted his distaste for sex when a young Gandhi had a sexual urge while attending to his ailing father and slipped away momentarily to his wife’s bed to fulfill his desire. When he returned, his father wasn’t there any more. This incident filled him with remorse.

But sometimes his experiments went a little too far. At an old age after his wife’s death, his experiment of sleeping naked with his nubile niece to test his control over libido attracted some controversies. His opponents, notably the Muslim League made a big deal out of it. Gandhi finally discontinued this practice after some persuasion by an image conscious Congress party. What happened in the dark, stayed in the dark.

However, his method of protest being unique immediately caught the eyes of the world at a time when the electronic media was at its infancy but upcoming. The world stood up and took notice, appalled by the sight of the DANDI March protesters brutally mowed down by the DANDA (stick) of British Police (Indians who were majority in the police force had no qualms hitting or killing their own when ordered by the English). The victims didn’t show an iota of retaliation or remorse and went ahead with their protest, still taking the blows from the police baton and falling injured one after one another, until they couldn’t carry on any further.

This incident was covered extensively by the western media which brought Gandhi and his unique mode of protest to the limelight. Gandhi was an idealist, whose idealism did not fail in his missions, though finally he fell to an assassin’s bullet. His ideology of non-violence was later replicated by Dr. Martin Luther King Junior half a world away in The United States to fight for Civil Rights for the Black minorities. Dr. King, like his idol Gandhi was too assassinated, but both vindicated the efficacy of “Non-violence” as a mode of protest.

When India celebrated its independence, arguably brought to by his non-violence means, instead of celebrating, Gandhiji spent the day praying and fasting. He was steadfast in his pursuit for Hindu-Muslim unity, but India was partitioned amidst bloody violence on communal lines, opposite to what he stood for. Gandhi failed to stop the partition from happening.

As mentioned by the eminent Freedom Fighter and Social reformer from Odisha, Pandit Nilakantha Das who was a contemporary of Gandhijee, the latter visited the Satyavadi School in Sakhigopal, near Puri during his trip to Odisha in 1923. Sri Das disagreed with his mode of operandi by getting freedom through the spinning wheel of CHARKHA. After completing his public meeting at Puri, it was Gandhi’s turn to proceed towards his next stop – Cuttack.

Gandhi’s team suggested that half of them would travel by train and the rest by PADAYATRA (March on foot). But Pandit Nilakantha advised all of them to take the walk, so as to build the momentum of public enthusiasm, giving Gandhi an opportunity to better connect with the local polulace. Gandhijee headed to Pandit Das’s advice, opting for a walk.

On the entire journey Gandhi’s entourage survived on boiled rice and vegetables. It was tough on Pandit Nilakantha, who loved his fish curry. Midway, he came across a leper and donated his hand spun KHADADA (crude cotton cloth) to the destitute. Next day, Bapuji encountered a group of KELA (nomads) feasting on Barbecued KATASA (wild cat) who strayed into their camp.

He went on preaching vegetarianism to them, trying to dissuade them from eating meat. Gandhijee advised them – “Eat milk and ghee which are good for health. Stop committing the HIMSA (violence) of killing animals”. But for the poor nomads, milk and ghee were pipe dreams, a distant luxury and KATASA MANSA (Wild cat meat) was the crude reality.

After his death, his countrymen hardly retained his ideologies. India continued to be riddled with violence of all sorts, later in the form of terrorism.’

Goutam Buddha, Mahatma Gandhi and the Saint Poet Bhima Bhoi were the true messengers of Bharat and its civilisation, as mentioned in Vedas, Upanishads and Geeta. A majority of others are traders and politicians.

Now,Gandhi is in Lakshadweep. Barring Ashoka pillars erected in a few uninhabited islands, Lakshadweep, India’s Muslim majority archipelago, has been free of statues till now.

For the first time, the country’s smallest Union Territory in the Arabian Sea has got its first statue — that too the statue of the Father of the Nation on Gandhi Jayanti.

In 2010, during the UPA rule, a Rs 2 lakh statue of Gandhi was brought to the island but it could not be installed. Officials then had reportedly blamed the “bad weather” condition prevailing in the sea for failing to offload the bust of Gandhi bought from Kochi in a vessel. Sangh Parivar groups then had alleged that local sentiments had prompted the authorities to send back the vessel without offloading the cargo. Activists of Save Lakshadweep Forum (SLF) rejected the allegations, saying the people of the islands had never objected to the installation of the statue of Gandhi in the islands.

The country should also remember Lal Bahadur Shashtri as its second prime minister, the most honest politician of his time and the most important Minister in Nehru cabinet after Patel.Incidentally he shares his date of birth with Gandhiji.

And Assam Police celebrated birthday of Gandhiji by honouring a former ASI who died for the country as reported by my young friend Daniel Engti :

‘Assam police honoured my dad by visiting our house and bringing flowers for my mom in dad’s honour for his service.

(Dad was an ASI in Assam Police , killed on duty during an ambush attack by UGs in 2000 near Langsoliet, Diphu-Lumding road)

Thank you Assam Police for remembering my father Lt ASI Sarsing Engti even after 20 years.’

What a nice way to honour Father of the Nation !