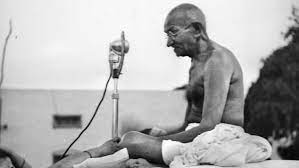 ‘Ramabou,Ghare Achha.’ (Rama’s Mother,are you at home ? ) my father called.A middle aged lady came out.Both spoke each other and the lady came with keys of a house next to her house.My mother,younger sister and I entered to the house.Our belongings were brought by the people who brought it by a trolley.We came to reside in the house as tenants.

It was a wonderful house at the sea coast of Puri.We remained in it for about 8 years.I was 4 years old then.My elder sister used to stay with my uncle and Grand Mother at Sambalpur,my uncle was a Magistrate posted there.The house was near Patharpuri Hostel,once home of poet Rabindranath Tagore at Puri.

Soon I got a few wonderful new
friends.Rabi,Prafulla,Rebanani,Tuni,Bulu etc etc.Rabi Bhai used to stay with his elder brother Raju Bhai at Bhubaneswar.Raju Bhai was son of Rama Bou.Ramanani was also there,she was a bit senior to us.A few days after my elder sister came from Sambalpur and joined us.

Being a Gandhian my father did not have any caste feeling. But my mother had.She was not very happy when my sister began celebrating ‘Khudurukuni Osha’ ( A Festival celebrated once in a week,I think Thursday,by unmarried girls in the month of Bhadrab,one of the months in the rainy season, to worship the Goddess Khudurukuni).The festival was celebrated those days by girls of non Brahmin families.My sister and I had,apart from she contributing some cash or kind  for the festival ,had a nice job…to pluck flowers from the tree and bring it to be used for the ritual based worship.Trees had a lot of flowers those days,Puri was a small town ,no pollution,no effect of Global Warming………..Trees had a lot of flowers and they were happy to give them.

My father was with Swatantra Party,it was then the political party in power in Odisha.Rajendra Narayan Singhdeo,the erstwhile king of the princely state of Patnagarh,was the Chief Minister.My father was the General Secretary of Puri District and had very good rapport with the Chief Minister and a few prominent ministers,especially Shri Rajballav Mishra and Shri Harihar Patel.They used to have small party meetings on the roof of our house…just in front of the sea.

Chief Minister Shri Singhdeo wanted to give a party ticket to my father in 1967.He politely refused and decided to remain in organisational politics.People like Gobinda Mousa and my father were different,they always wanted to build up the structure  so that their party will have a solid base among people.Fighting an Assembly election was requiring a few thousand rupees and that was on people’s contribution.Leaders were doing their election campaign on Bicycle or on foot,may be at best a Jeep.

How beautiful was the friendship between Gobinda Mousa and my father….they were in two different political parties,but were staunch Gandhians.Gandhism was the binding force and the other  binding force was a sense of  commitment for people.

Gobinda Mousa did not have a house in Puri,nor my father.Fakir Mishra was the Chairman of Puri Municipality.He offered a piece of land  to both as journalists and social workers respectively .My father did not accept the offer and on frequent request from Fakir Mousa,,opted in favour of my uncle.I do not know what Gobinda Mousa did.Interestingly,Fakir Mousa was in Congress and my father was in Swatantra Party ,but political rivalry was not there in the discharge of duty,whoever deserves was getting the dues.

The State Government in 1968 offered a few built in houses to Social Workers and Journalists at Bhubaneswar.Chief Minister personally told my father.’I am working at Puri.What shall I do with a house at Bhubaneswar ?’ It was my father’s reply.

Alas,these days tiny political workers of any place want a house at the state capital to further their political ambitions ! And my father wanted to work for the people of his place in the Gandhian ideology of Gram Swaraj living with the people to serve them.It has become difficult for the people to meet their elected representatives after they get elected.I am told,our dear MP from Puri has not visited his constituency for the last few months…and our CM got him at the cost of Braja Kishore Tripathy,a real worker for the people.

No wonder,it is not people’s support,but political wave that governs the country now at the centre and at  the level of states.What a nice way to kill Gandhi and his ideologies.It is not Nathuram Godse,we killed Gandhi and have been butchering his body for the last 70 years,now it has become more rampant.