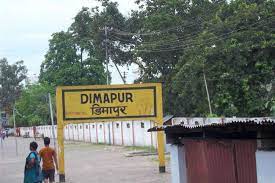 Now time has come for passive resistance in a Gandhian manner throughout the country. I was in the Indigenous Music Festival organised by Abiogenesis Society at Dimapur on 7 October 2017. Met a lot of friends there,I was thrilled.

Alas,it coincided with the Festival of Literature of Manipuri Sahitya Parishad at Shillong,else I could have attended that programme too. But I didn’t as a matter of my passive resistance to a state sponsored programme.

We are speaking a lot now about the so-called Nationalism.These days Nationalism is a buzz word in the entire world. In the age of acute Globalisation ,there was an expectation that the National Boundaries would melt and the world and people would be united by many threads- Market, Culture, Technological Development, Language etc.

But now after almost over 50 years, the so-called Globalisation has failed and many are thinking of Deglobalisation and thereby reviving the concept and practice of Nation-State, National Interest etc giving rise to ultra right sentiments. This has resulted in the revival of Nationalism in every country.

We have to analyse Nationalism in the present context and redefine it. The Political Parties are arousing Nationalist Passion in so many developments – a) Conflict with Neighbouring Countries, b) Terrorist Attacks, c) Threat to National Sovereignty  and Integrity etc. India is a Multi-cultural. Multi-religious, Multi-Language country with so many diversities.

There is a story of King Akbar. He was doing a mass prayer on the open grounds. And there was a fakir(saint) who passed by. The king asked God, “Give me more wealth, Give me more prosperity,” etc. And as he was about to finish, the fakir(saint) who was moving around, passed that way, he just stood and watched him for a couple of minutes and he moved away. And Akbar got up and said, “Oh, wait, wait, what is it that you want? Because I will give you whatever you want. You ask me.” You know, this used to be the tradition in those days. Kings allowed people to ask them whatever desire they had.

Then Fakir said,”I don’t take anything from a beggar. You yourself were begging, five minutes ago to God to give you more wealth and prosperity! You are still a beggar being an emperor. I don’t need to take anything from you. I’ll take it from whomever you are asking.”

Sometimes you need to disconnect and pretend to be busy, not in a way people understand, but busy being taking deeper breaths.Getting busy in silencing the irrational thoughts.Getting busy in calming the racing heart.Getting busy in listening to your body’s needs to rest.

You don’t need to be apologetic for that, it’s a necessity, that you don’t forsake yourself and prioritize others in the process. Sometimes taking care of yourself is the best gift you can ever give it youself and to others. You cannot pour from  an empty vessel. You need time to recover and recharge before you take charge of others,don’t forget that your mental and physical  health is invaluable. Don’t forget to fill your own cup. A throne does not belong permanently to anybody. Yesterday it was with Congress, today with BJP and tomorrow may be with someone else.We have seen big empires and emperors going to ashtray.There is little difference between blind followers and criminals.This reminds me of Tagore and his noble thoughts:

‘O Fool,to try to carry thyself upon thy
own shoulders ! O beggar,to come to
beg at thy own door !

Leave all thy burdens on his hands
who can bear all,and never look behind
in regret.

Thy desire at once put out the light
from the lamp it touches with its breath.
It is unholy-take not thy gifts through
its unclean hands.Accept only what is
offered by sacred love.