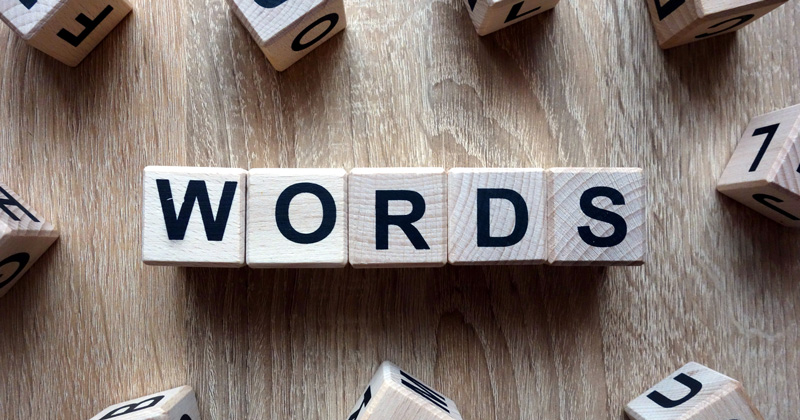 Samuel Beckett once said, “Words are all we have.” Here are a few more reflections on the nature and value of words —
.
(a) Words are not as satisfactory as we should like them to be, but, like our neighbors, we have got to live with them and must make the best and not the worst. (— Samuel Butler)

(b) I fell in love — that is the only expression I can think of — at once, and am still at the mercy of words, though sometimes now, knowing a little of their behaviour very well, I think I can influence them slightly and have even learned to beat them now and then, which they appear to enjoy. I tumbled for words at once. . . . There they were, seemingly lifeless, made only of black and white, but out of them, out of their own being, came love and terror and pity and pain and wonder and all the other vague abstractions that make our ephemeral lives dangerous, great, and bearable. (— Dylan Thomas, “Notes on the Art of Poetry,” 1951)

(c) Uttering a word is like striking a note on the keyboard of the imagination. (— Ludwig Wittgenstein, Philosophical Investigations, 1953)

(d) No word can be judged as to whether it is good or bad, correct or incorrect, beautiful or ugly, or anything else that matters to a writer, in isolation. (— I.A. Richards, The Philosophy of Rhetoric, 1936)

(f) As a rhetorician, I loved only words: I would raise up cathedrals of words beneath the blue gaze of the word sky. I would build for thousands of years. (— Jean-Paul Sartre, The Words, 1964)

(g) Words are really a mask. They rarely express the true meaning; in fact they tend to hide it. (— Hermann Hesse, quoted by Miguel Serrano, 1966)

(h) xxx the entire history of the concept of structure, before the rupture of which we are speaking, must be thought of as a series of substitutions of centre for centre, as a linked chain of determinations of the centre. Successively, and in a regulated fashion, the centre receives different forms or names. The history of metaphysics, like the history of the West, is the history of these metaphors and metonymies. Its matrix … is the determination of Being as presence in all senses of this word. It could be shown that all the names related to fundamentals, to principles, or to the centre have always designated an invariable presence — eidos, archē, telos, energeia, ousia (essence, existence, substance, subject), alētheia, transcendentality, consciousness, God, man, and so forth. (— Jacques Derrida, “Structure, Sign and Play” in Writing and Difference).

He replied ,’I’m from the pious city of Ayodha ,where you had been incarnated in the Tretaya yug. I just built a temple there at your birth place.’

-It is in Uttar Pradesh which I made  as Uttam Pradesh. You would be happy to know that I demolished and renamed many places which carry the Name of Allah.

The disciple said,’ It is in India the country where you have been taken many incarnations.’

The disciple told, ‘ it is on the earth in one planet.

God asked ,’Tell me the code of the planet.There are crores of planets we control here .’

The disciple  got confused and could not tell the code. He asked curiously, ‘is this the abode of the Lord ? ‘

The God told him, ‘yes it is. But I’m the gate keeper here in his entry of abode. I saw the person once when he appointed me here 1000000000 yeare ago, thereafter he never came here and no one entered during my tenure.

God replied to him,’ for the time being you can go to hell. I will tell you about your arrival when I find him next time .’

The Disciple expressed his inability to go to hell alone. He told the gatekeeper, ‘ I do not know the route.besides I was a Yogi and a Chief Minister ,I feel ashamed to go to hell.’

The gatekeeper sent another god to show him Hell. He reached there, and was astonished to see the place. There are many beautiful women dancing there and very sweet music is heard. He is now excited, when the entrance of God’s abode was so lonely, the hell is so beautiful !!

He entered inside step by step and found very thrilling scenes one after another. In a place in a hot oil drum a man caught from his hairs put up and down. In another place  he saw a few people cutting the limbs of a man .  And so …on.

He found a man sitting in a chair and directing how to be punished who came to hell. The disciple asked him with fear, what is the matter ,why people are punished here and why beautiful women are dancing at the  entrance. …( From an unknown friend)
—————————————
The Great Indian Press and Politics .India, China Military Talks Collapse. The Chinese refuse to budge as expected. Much needed for Assembly elections in India.Have we ever compared expenses for Covid Care vis a vis recoveries from Covid ?

Maria Ressa of the Philippines  and Dimitri Muratov have been congratulated by the Media Persons and Activists of the World for their courageous stand against the Powerful Rulers of their counties. This year’s Nobel Peace Prize  is symbolic as a large number of Media Persons  face all kinds of threats. On the other hand, many media persons and media houses have been co-opted by the regime and power structure. Is anyone surprised?

And, immediately the son of an Editor was killed at Bhubaneswar !