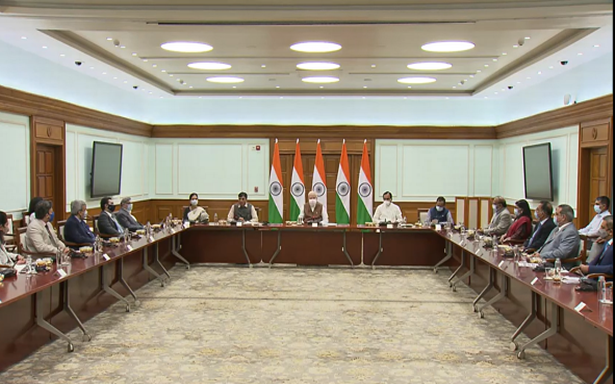 NEW DELHI: The entire world is looking up to India in the backdrop of the success of its COVID-19 vaccination drive, Prime Minister Narendra Modi said on Saturday as he lauded vaccine manufacturers for playing a “big role” in the success story of the country.

Modi made the remarks during his meeting with Indian COVID-19 vaccine manufacturers who said his leadership was a key factor in India being able to administer 100 crore doses of the jabs in just about nine months.

The domestic vaccine manufacturers appreciated the vision and dynamic leadership of the prime minister in providing continuous guidance and support towards the development of the vaccines, a statement issued by the Prime Minister’s Office (PMO) said.

They also praised the never-seen-before collaboration between the government and the industry, and applauded the regulatory reforms, simplified procedures, timely approvals, and forthcoming and supportive nature of the government throughout this endeavour, the PMO said.

The vaccine manufacturers noted that had the country been following old norms, there would have been a considerable delay and “we would not have been able to reach the vaccination level that we have attained till now,” the statement said.

Prime Minister Modi praised the efforts of the vaccine manufacturers, which has resulted in the country crossing the milestone of 100 crore vaccinations, and said that they have played a big role in the success story of India.

He appreciated their hard work and confidence given by them during the pandemic, the PMO said.

The prime minister exhorted that the country needs to institutionalise the best practises learnt during the last one-and-a-half years, and said that this is an opportunity to modify our practises, in tune with the global standards.

He said that the entire world is looking up to India in the backdrop of the success of the vaccination drive.

Modi also said that the vaccine manufacturers should continuously work together to be ready to face future challenges.