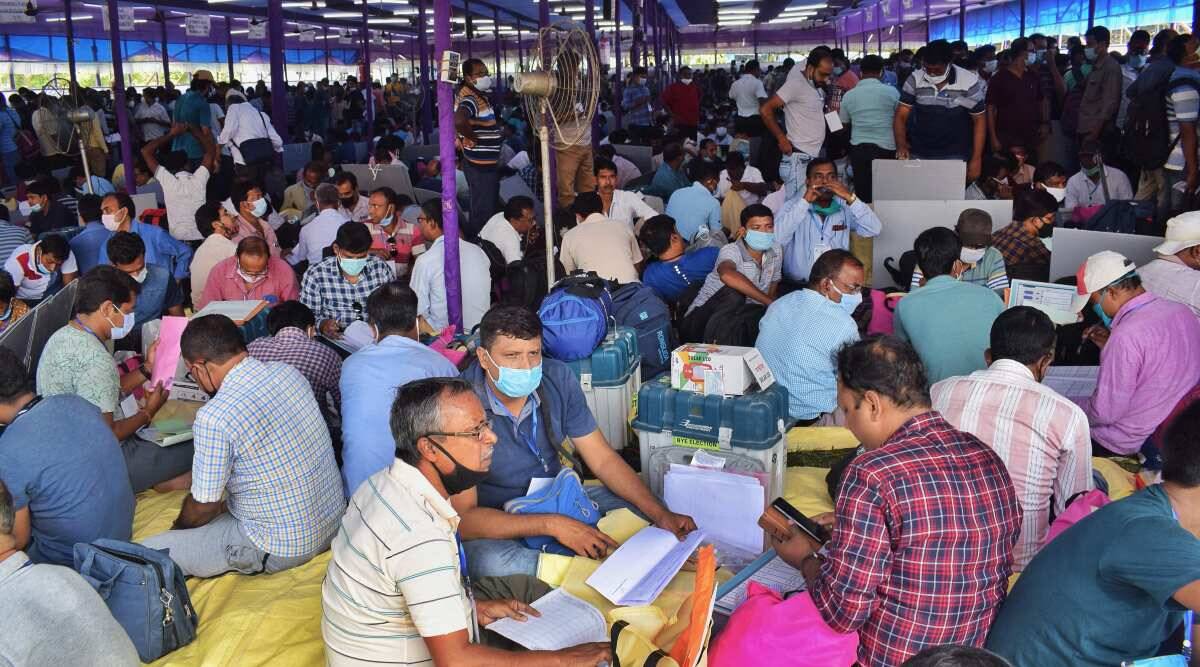 NEW DELHI: A turnout of 50 percent to 90 percent was recorded in three Lok Sabha and 29 assembly constituencies spread across 13 states during by-elections on Saturday, with INLD leader Abhay Chautala, who quit the Haryana assembly in protest against the new agri laws, and Congress’ Pratibha Singh, wife of late chief minister Virbhadra Singh, among the prominent candidates in the fray.

The voting passed off peacefully and it was ensured that all Covid-19 safety measures were followed, officials said.

HIMACHAL PRADESH
In Himachal Pradesh, Mandi Lok Sabha seat from where Pratibha Singh is contesting saw a turnout of 57.73 percent. She was pitted against BJP’s Khushal Singh Thakur, a Kargil war hero who is trying his luck at the hustings for the first time.

The Mandi seat fell vacant after the death of Ramswaroop Sharma (BJP) in March.

The first voter of independent India, 104-year-old Shyam Saran Negi, cast his vote at the model polling station of Kalpa in Kinnaur district.

Also, the world’s highest polling station at 15,256 feet in Tashigang village recorded 100 percent turnout despite freezing temperature of minus 16 degrees Celsius with all the 47 registered voters – 29 men and 18 women – casting their votes, an election official said.

The polling percentage in Fatehpur, Arki and Jubbal-Kotkhai was 66.2, 64.97 and 78.75 respectively. The by-election in Himachal Pradesh are crucial as assembly polls are due in the state early next year.

RESULTS ON NOV 2
Besides the three assembly seats in HP, bypolls were held in five assembly seats in Assam, four in West Bengal, three each in Madhya Pradesh and Meghalaya, two each in Bihar, Karnataka and Rajasthan and one seat each in Andhra Pradesh, Haryana, Maharashtra, Mizoram and Telangana.

Out of these, the BJP was holding around half a dozen seats, the Congress had nine, while the rest were with the regional parties.

The counting of votes will take place on November 2.

BIHAR
In Bihar, an estimated 49.60 percent voting was recorded in the two assembly constituencies of Kusheshwar Asthan and Tarapur which were held by the JD(U).

MEGHALAYA
In Meghalaya, the highest voter turnout at 90.63 percent was recorded in Rajabala while Mawphlang and Mawryngkneng registered 76.9 percent and 75.06 percent polling respectively.

Former national footballer Eugeneson Lyngdoh is contesting the election from Mawphlang on a United Democratic Party (UDP) ticket. He is up against former Congress MLA Kennedy C Khyriem and a sitting member of the district council (MDC) from the NPP, Lamphrang Blah.

HARYANA
In Haryana, 80 percent voting was recorded in the by-election to the Ellenabad Assembly constituency, necessitated by the resignation of Indian National Lok Dal (INLD) leader Abhay Chautala as MLA in protest against the Centre’s new farm laws.

It is an important contest for the Chautalas as Abhay Chautala had won the 2010 bypolls from Ellenabad when Om Prakash Chautala vacated the seat, and then retained it in 2014 and also in 2019 Assembly polls, when he was the lone INLD MLA in the House.

The by-election in the constituency, which is part of the Union Territory of Dadra and Nagar Haveli, Daman and Diu, was necessitated due to the death of seven-time independent MP Mohan Delkar whose wife Kalaben Delkar is contesting as Shiv Sena candidate against BJP’s Mahesh Gavit and Congress’ Mahesh Dhodi.

MADHYA PRADESH
Khandwa Lok Sabha seat in Madhya Pradesh, whose MP Nand Kumar Singh Chauhan of the BJP had died, witnessed a turnout of 63.88 per cent, while an estimated 64.60 per cent voting was recorded in the three Assembly seats.

TELANGANA
Over 86 percent voter turnout was recorded in Huzurabad Assembly constituency in Telangana with the ruling TRS, opposition BJP and Congress locked in a triangular contest.

The by-election was necessitated in view of the resignation of Eatala Rajender in June following his removal from the state Cabinet over allegations of land grabbing. Rajender, who dismissed the allegations, had quit the TRS and is contesting on a BJP ticket.

The byelection is seen as a do-or-die battle for Rajender, while it is significant for the BJP as it aims at emerging as the alternative to ruling TRS in the 2023 Legislative Assembly elections.

The ruling BJP has fielded candidates in three seats leaving the other two to alliance partner UPPL. The Congress put up nominees in all five, while its former allies, the AIUDF and the BPF, are contesting in two and one seats respectively.

Barring a few stray incidents, polling, which began at 7 AM, passed off peacefully in all four constituencies, an Election Commission official said.

Scuffles between TMC and BJP supporters were reported outside a booth in Khardah and security personnel used batons to disperse the crowd.

Kajal Sinha’s death due to Covid-19 necessitated the by-poll in Khardah.

According to TMC members, Sinha’s son Arjodeep was injured in the melee and had to be hospitalised.

In Dinhata, TMC heavyweight Udayan Guha is looking to reclaim the seat, which the BJP had snatched from him in the April elections.

The by-election was necessitated following the resignation of Nisith Pramanik, now Union Minister of State for Home Affairs, as he chose to retain his Lok Sabha membership.

In Santipur, BJP MP Jagannath Sarkar resigned from the assembly, thus calling for a bypolls.

Bypolls to Dinhata and Santipur are seen as a prestige battle for the BJP, which is currently grappling with an exodus of MLAs and senior leaders.

RAJASTHAN
An average of 70 percent voter turnout was recorded in the bypolls to Dhariawad and Vallabhnagar assembly constituencies of Rajasthan.

The bypolls were necessitated due to the demise of Congress MLA from Vallabhnagar Gajendra Singh Shaktawat and BJP legislator from Dhariawad Gautam Lal Meena.

In Vallabhnagar, the ruling Congress party has given a ticket to Gajendra Shaktawat’s wife, Preeti Shaktawat, while the BJP has fielded Himmat Singh Jhala.

Though the number of constituencies going to bypolls is not crucial from the viewpoint of the government’s stability, the results will send a message across the state about the performance of the Congress-led government, which had faced a major threat last year due to the rebellion of the then deputy chief minister Sachin Pilot and 18 MLAs led by him.

The by-election was necessitated following the death of Sindgi JD(S) legislator M C Managuli and BJP’s C M Udasi from Hangal and will be the first electoral test for Chief Minister Basavaraj Bommai, who had replaced B S Yediyurappa.

While Ramesh Bhusanur, who came second behind Managuli in the 2018 polls, is the BJP candidate from Sindgi, Shivaraj Sajjanar is its candidate from Hangal constituency.

The JD(S), which was the first to announce its candidates, has fielded 33-year-old Naziya Shakeel Ahmed Angadi from Sindgi and 35-year-old B.E, M.Tech graduate Niyaz Shaikh from Hangal.

MAHARASHTA, MIZORAM
By-election was held in Deglur in Maharashtra, earlier held by the Congress, and Tuirial assembly seat in Mizoram which recorded a turnout of 81.28 percent.