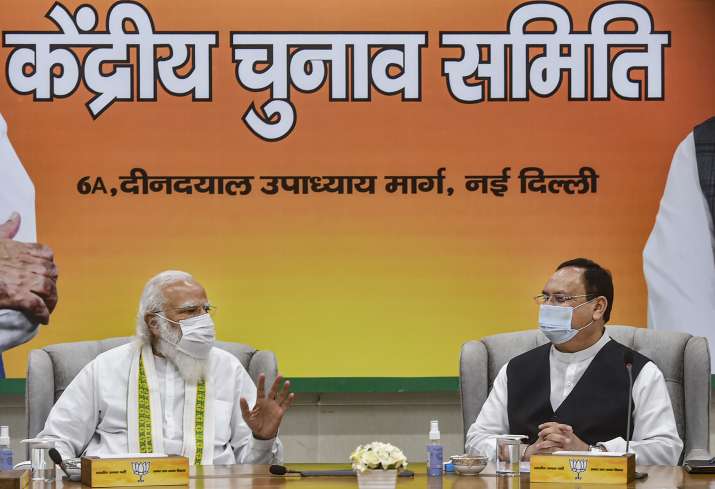 NEW DELHI: BJP president J P Nadda on Thursday chaired a meeting on the Uttar Pradesh assembly elections here as the party looks to step up its campaign and prepares poll programmes of its top leaders for the state, where retaining power is crucial to its fortunes.

The BJP is likely to launch ‘vijay sankalp rath yatras’ in the state which will touch every assembly constituency, sources said.

Such yatras have been a customary part of the party’s campaign in assembly polls.

The sources said the upcoming programmes of the top BJP leaders, including Prime Minister Narendra Modi, Home Minister Amit Shah, Defence Minister Rajnath Singh besides Nadda, were discussed in the meeting which also took stock of the current political situation and the party’s strategy.

Shah and Singh besides Nadda will also be holding organisational meetings with booth presidents of different regions of the large state, the sources said, noting that the home minister will be handling western Uttar Pradesh, a region where the perceived Jat anger over the farmers’ agitation has the potential to harm the party’s electoral prospects.

Union minister Dharmendra Pradhan, who is the party’s poll in-charge for the state, and Uttar Pradesh BJP chief Swatantra Dev Singh were among the leaders who attended the meeting.

The sources said the upcoming programmes of the top BJP leaders, including Modi, were discussed in the meeting which also took stock of the current political situation and the party’s strategy.

The likely ‘vijay sankalp rath yatras’ in the state will galvanise party cadres and touch almost every assembly seats, they said.

The party is also taking feedback to prepare its manifesto for the elections expected to be held early next year.

The BJP had won a whopping 312 seats in the 403-seat assembly in 2017. Its electoral dominance of the state has been crucial to the party’s stupendous performance in two back to back Lok Sabha polls, and it is likely to pull out all the stops to repeat the performance.