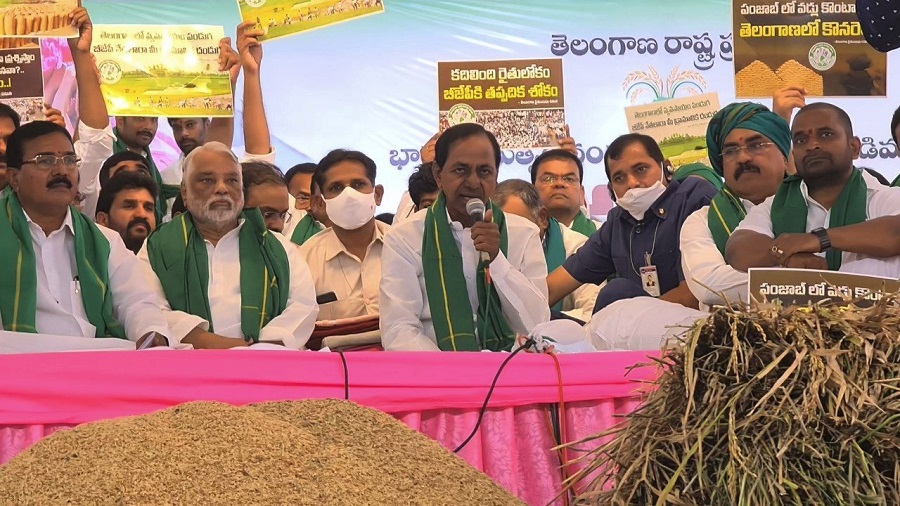 NEW DELHI: Telangana Chief Minister K Chandrasekhar Rao on Saturday, November 20, announced an ex-gratia of Rs 3 lakh on behalf of the Telangana government to families of each of the “700-750 farmers” who lost their life during the agitation — roughly providing ex-gratia of Rs 22 crore.

He also demanded that Prime Minister Narendra Modi immediately take steps to withdraw all cases filed against farmers during the agitation against the three farm laws and also announce an ex-gratia of Rs 25 lakh per family of all those who died during the stir.

“When we talk about ‘Atma Nirbhar Bharat’, Atma Nirbhar Krishi (self-reliant agriculture) is very much necessary in this country. Because we are a very populous country. Our population is reaching 140 crore today. If there is any setback in agriculture in the country, then no country in the world has the capacity to feed us,” he said.

“I humbly request the Prime Minister that India’s agri sector be made ‘atma nirbhar’ on top priority,” he said.

Alleging that the NDA government delayed on deciding Telangana’s share in Krishna and Godavari river waters, he said he would meet Union Jal Shakti Minister Gajendra Singh Shekhawat during his next visit to Delhi and demand that the state’s share be decided.

Telangana and neighbouring Andhra Pradesh have had sharp differences over river water sharing. If the Centre does not form a tribunal and refer the matter to it, TRS would launch a massive agitation, besides raising the issue in Parliament, he said.

He further alleged that the Union government has failed in fulfilling its responsibility of deciding the river water sharing issue.

The CM also demanded that the Union government decide on other pending state issues and demands, including increased quotas for STs, caste census of backward classes and classification of SCs. He threatened to launch agitations on these issues as well.

Recalling that the Union government had described caste census of backward classes as a sensitive issue, he wondered what was the need to keep it confidential. “When casteism is a reality in the country, what is the need to keep the census a secret?” he asked.

He also demanded that the Union government convey the annual target for paddy procurement in a year from Telangana. He held a dharna on Thursday over the issue. The dharna by KCR and other TRS leaders came against the backdrop of a war of words between ruling TRS and BJP over paddy procurement and a clash between the activists of the two parties during state BJP president and MP Bandi Sanjay Kumar’s visit to procurement centres this week. He said a delegation of ministers, MPs and officials would leave for Delhi soon to demand that the Union government convey the “annual target”.